I’m wasted. It is 4 o’clock on a dark afternoon as I’m inside a windowless baggage claim terminal of the Quito airport waiting to be rescued by Lee flying in from an unknown city to meet me around 5 o’clock. I hope he makes it. If he misses his flight, he told me his next flight lands around 8. If I were smart, I might cross-check schedules to deduce his departure city. New York? Miami? Des Moines?

I’m tired and ill, having boarded my plane at midnight back in San Francisco to fly overnight through Miami. At least I made my fifty-minute connection in Florida. I have not eaten since breakfast. Airport narratives are so boring.

So the Dudeks, R+S divisions, embark on yet another ill-fated Christmas trip. We’re on a string of O’s: Mexico (2012), Rio (2013), Morocco (2014), and now the Galapago(s) or Quito (2015). I wanted a trip more relaxing than the crowds of Rio, less cold than the dessert of Morocco. So we saved and splurged this year for an almost-all included 8-day cruise of The Galapagos Islands. I want to ride a turtle, or at least see some natural splendor.

This trip almost did not happen because Ray did not kick off planning, and we could not snag a fourth person to fill the double-occupancy boat cabins. Of course Lee is coming as our third. For a fourth, Ruben could not afford the splurge and I’m on the outs with Greg. Fortunately, Ray found his horse-riding instruction Adriene. I hope she gets along with the Twodeks.

Ray grades final exams back in Ohio. Lee and I fly out early for 3 nights in Quito before we hit the islands. It would be nice to know the name of the hotel where we are staying tonight, but that is Lee being Lee.

The customs office next to me keeps nailing people for not paying tariffs on flat-screen TVs. I hope Lee comes soon – it would be quite the mess otherwise. My brief look of Quito from the air seems foggy and alpine. My ass hurts from sitting too long. I could use some calories to prevent death by starvation.

I sorta put my life in order before I skipped town. Work is in a fairly good state with software applications whirring away. I have a giant plastic sphere taking up my living room. The messy situation with Greg weighs on me; he so wanted to go on this trip.

I am on Lee’s wild ride. I thought from the aeropuerto, we might hop a taxi into downtown Quito for a quiet night of drinking and dinner. No, Lee instead rented a motorcar, a tiny blue Ford with manual transmission. Just after sunset, we zoomed out of the airport south, skirting Quito, and into the Andean mountains to stop for the night in the bizarre ramshackle town of Machachi. Lee’s hotel reservation fell through but there was lots of room in this inn. Instead of wandering the shuttered town, we had the inn’s proprietoress’s Mom cook us a simple but excellent dinner. A bottle of wine knocked us out. I slept well on my tiny bed.

Why travel? Why go through the uncertainty, danger, and deprivation? I could throw the money, about $4000, instead on a fancy computer, dinners, and new clothes. However, I feel a moral obligation to see the world as it is – ramshackle Andean town – and not as we envision it with coconut drinks under palm trees by the beach. 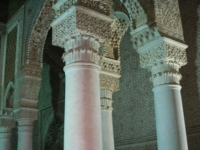