Julio tells us the yacht follows a complex schedule: sunrise here at 6am, snorkeling there at 8am. I suspect a national tourist organization orchestrates the ballet of boats across the limited number of Galapagos tourist sites. Our boat on its 8-day cruise shall visit obscure spots on less than half of the islands. Do luxury boats see the good stuff?

The yacht is exquisitely architected to conserve space. Our cabin door swings within an inch of my bed. The bathroom door barely clears the path of the cabin door. Our nightstand has rails to prevent bottles from rolling on to the floor. We adjust air-conditioning by two wooden sliders: one with holes, the other solid. I stow my luggage in the two drawers beneath my bed. No space is wasted in this 9’ x 7’ bedroom.

We discover more about our fellow travelers. The cute Germans are brother and sister (later discounted). I went to chemistry graduate school with Wendy, one of the Americans. She now works for Space-X in Los Angeles. Her husband Chuck works for Google in computer vision. The new couple is Argentine. Dane Jan builds roads in Copenhagen, spends his 6-8 weeks of annual vacation all at once on travel. On the passing of his father, he escorted his mother to The Pyramids and then to The Great Wall of China. The Swiss couple hardly speaks to anyone; she knows little English – I empathize.

Ug, Monday with its commute back to work. Not this week. We wake reasonably late at 7am for morning breakfast, after which we panga out to South Palvas, a little uninhabited island known for its land iguanas.

Galapagos iguanas come in two main varieties: marine and land. The iguana lot split long ago, the marine ones eating seaweed and the land iguanas going after cactus. Although the two live together, they do not mix. The marine iguanas are spiky, coal-black, very punk rock. The land iguanas glow brighter yellow and orange.

While sitting amongst iguanae, Julio tells us about their evolution and mating habits. From Iguana Point, we ascend the island to the far cliffs. Sadly, the iguanas are decimating their only food supply, the prickly cacti, that they eat spines and all. Recently, conservationists have caged young cacti to give the little plans a chance to grow protected from ravenous iguanas.

Sea lions, even dead ones, abound on this island. One poor sea lion suffers an oozing chunk taken out of its rear flippers by a shark. Nearby, a mother gives birth to a baby sea lion. Frigate birds, iguanas, and crabs fight over the seal placenta.

On the path, Julio screams back to our group, “I hate you! I hate you!” for the group’s amazing luck with rare animals. First a hawk; then several short-eared owls; now a rare hybrid iguana descended from a land and marine iguana – a super iguana that can both swim and move swiftly on land. This hybrid iguana looks black with faint white stripes.

Early afternoon, we snorkel from Isla Bartolomé, jumping off the panga, following the retaining wall across the bay. I watch two giant sea turtles butt heads under water, one with a conch shell stuck to its back.

To finish the afternoon, we land on a beach with frolicking sea lions. A baby sea lion chases a beleaguered mother for milk. We walk up the rocky trail to check out the tallest cacti on all of the islands. Like the uniquely folded dinner napkins each night on Yata Frigata, each Galapagos island has its own endemic species of cactus.

At our pre-dinner briefing in the yacht’s stateroom, Julio warns us about tomorrow’s 6am morning snorkel. When the boat starts its nightly lurch across open sea shortly after dinner, Lee and I watch the pounding wake at the boat’s stern before going to bed absurdly early between 8-9pm. There is little nightlife on this cruise, and we like it this way.

Strange how travel, especially far-away travel, alters and erodes perspective. For the first days on the Ecuador mainland at the beginning of this trip, I thought about Greg a lot: stuff I should say or write, missing him, or how we might restart on my return. Five days later on a boat, I dwell less on the relationship.

Now I sail on a boat over rough seas. I trek desolate lava fields past strange birds. I grow used to loneliness. I am a strange bird. I am a boobie.

I want to travel with a companion who is similarly excited, willing to risk, willing to explore. I want to new outside to open up the new inside. I desire common stories, adventures, grand tales of daring. I seek teamwork, companionship, and mirth. One day at a time?

Tomorrow is Tuesday, the summer solstice, the longest day of the year, spent ironically quite close to Equator. I wanted to measure shadows at noon to see whether finally my shadow disappeared. I return to San Francisco on Monday. Still much adventure ahead. 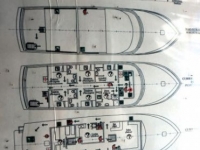