We’re in Quito at 2850m or roughly 8555ft above sea level, the altitude at which we slept the night before. Of world capitals, only La Paz, Bolivia, is situated higher than Quito. At this altitude, I feel neither dizzy nor short of breath – just seasick, or rather landsick.

Lee and I sleep in until an unruly 8am, then join Ray and Adriene on the hotel roof for breakfast. So odd now to eat as four and not as sixteen.

The Saturday morning streets are quiet the day after Christmas. Most shops are closed. We wander Plaza San Domingo then the “romantic” pedestrian thoroughfare of La Ronda where Ray buys a bird mask for his collection and Lee and Adriene buy chocolate. I sorta wish I collected something, but I no longer do.

Over the course of a long, happy day of walking, we hit church after shop. We climb a clock tower for an amazing view of central Quito. We stuff ourselves almost sick at a cevicheria with fish stew and tuna ceviche. Quito is quaint, lively, colonial, hilly, atmospheric, and approachable – a tiny Mexico City with few attractions and one less Ruben.

We drink excellent afternoon hot chocolates at a little chocolateria and then sunset craft beers at a marvelous Mariscal bar poorly named Dirty Sanchez. Tired from six miles of walking through parks, boulevards, and lanes, we hop a $2.50 taxi back to our hotel in Old Town and tip the surprised driver 100%. We make plans to return later tonight to the Mariscal for clubbing (not seals).

Nightlife in a foreign country can be a tricky affair fraught with unspoken cultural norms. I am not a Latin man. I cannot dance salsa. I have a brother along so safety in numbers.

We cab back to the Mariscal for an awful pizza dinner with some starter beers at an outdoor bar. The surrounding square teams with young people, so not everyone is away for Christmas. Furthermore, the crowd is neither as exclusively stylish nor as off-putting as we feared.

We try Chervskers, a two-story brewpub that earlier in the afternoon barred us from entry due to lack of identification. Like opening the next level of a videogame, we return this evening triumphant with driver’s licenses. The bar is full and friendly. Almost everyone drinks beer by the full liter, including tables of just ladies. I order a liter; Ray summons a beer flight and ends up with five 12oz pours (trouble). Adriene gets another caipirinha; Lee inexplicably is not drinking.

Ray sways after 40 of his 60oz of beer. I start roaring. Time to move on to the nearby club, Bungalow 6, not as overwhelming as anticipated. There’s no cover. There are lots of little rooms including one with pool tables, another with a patio, and a third on the ground floor with a tight dance floor full of a mix of gringos and locals (maybe) fronted by a dj playing English-language hits.

I buy two beers, then two shots of tequila. Let the roaring continue. We pile into a cab as a hot mess for the ride home to the hotel before 1am. The hotel tap water tastes awful. 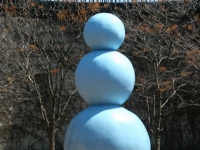