As our Kenya Airlines flight hurtles mid-morning over the fluffy-cloud South African veld from Victoria Falls, Zimbabwe to Cape Town, I consider, on this penultimate day of the decade, the year of 2019 that was. At this time a year ago, I was fleeing a Gulf Coast storm that threatened to delay my plane departing Havana to return to San Francisco and my comfortable New Year’s Eve routine of putting up a large LED installation—this time a 120-sided sphere—for the Comfort + Joy party at 55 Barneveld. I attended that NYE party alone. 2019 shed old relationships.

After the long eve night, John Major encouraged pressing through New Year’s Day 2019 outdoors at the unexpectedly-cold Breakfast of Champions block party. I shivered and danced until dark on my last day of freedom, for the next day (January 2) I started a new job. Illness, however, took away my voice, so on that first day of work, I boarded a work-bound shuttle like a kid on his first day of school, unable to talk, merely croaking my way through data sciences.

Synthego of Redwood City hired me in the fall of 2018 for the same data-visualization job from which I was traumatically fired the previous spring. Like a miserable guy hit on by a girl, I perversely resented Synthego for asking me out, not the other way around, typically when I beg and plead for a coveted position. Still, the new company promised to pay me more than the old company. If the uncertain 2019 year ahead consisted of coasting at work, I could always shop around for a more challenging job.

I began work redoing the same hundreds of graphs I set up previously at Invitae, yet oddly my colleagues dubbed me a rockstar. Although the offices consisted of a dumpy strip-mall compound, the culture spoke to me: the three at-work D&D games had waiting lists to join; I soon kicked off a shuttle cocktail service for coworkers to socialize on their Friday afternoon homeward commute; the gay and strange were so prevalent at work to be unremarkable. Mid-February, I skied for the only time of 2019 in Lake Tahoe with thirty software-engineering coworkers. Between board games of Arkham Horror with my boss and getting stoned on the cabin’s porch with a new crew, I realized I cared more for this company than I admitted.

In the spring, I hauled four Snowflakes, a Sphere, and a small Square in a rental van to the Gays Hate Techno weekend campout party. Stephanie found me quickly to rekindle romance for the weekend, another theme for the year. I did learn that a rope and box of white wine makes for poor rigging above a hot tub.

Back in New York, I cajoled dear David to take me to the Black Party in the Bronx. I have aged out of the cute crowd who no longer notices me. Still, my late forties have reduced my desire for sex.

Government forms ask for my profession. Now in my second gig as a software engineer / data scientist, I have bittersweetly left behind the family profession of chemistry. Or have I? An unusual tradewind blew all spring through the company: several colleagues quit, the chemical factory ran uncontrolled off the rails, and panic percolated through the executive suite.

I lunged into the breach. After covert conversations, I applied to run the Chemistry Development group. I have never managed before, but the senior executives were desperate. Although apprehensive to apply twice for work in the same year, I stuck the landing at the internal interview. The gave me job immediately after my riotous presentation. And so I was unexpectedly a chemist again.

That summer, I worked, and worked, and worked. Gone was vacation. Gone was Burning Man. I did not miss them. I did not miss the Triangles and the art car. Meanwhile at work, I fought, planned, wrote, fixed, assembled, and led. This was my great long march. I picked up colleagues, first Puzhou, then Tyler by chance, and finally Brett through long labors. They wanted to work with me. We formed the A-Team.

With this new chemistry gig, I thought I left software behind, yet as the only member of the ChemDev group who codes, I wrote tools to help others. I leaned on the wisdom of former bosses to set up a department. I put together three-dimensional mass-spec visualizations. I amassed code repositories. I taught others how to graph, script, and present reports.

First-pass yield climbed out of its cellar of 30% to double to 65%. I became the company hero. They gave me a raise. The job grew easier.

I picked up a new set of companions from work: Brett and Karen. We got drunk a lot on unnecessary cocktails. I took them to Odd Salon. I’m transitioning from rebellious youth to wise Dad. I’m twenty years older than most of my coworkers. Despite a giant new office of people, 2019 was not a year for dating. I’m too exhausted, too conflicted after work to navigate the complex delicacies of fledgling relationships.

2019 also was not a year for travel. Except for the flight to South Africa with Ruben on Christmas Day, I never left the country. I barely made it to any US states: Nevada for November’s Room Service party at a Lake Tahoe hotel; Ohio for 4th of July fireworks and the Yellow Springsfest music festival; Georgia in December for an unexpected airline layover bar-crawl through Atlanta; a difficult Thanksgiving in Massachusetts followed by a fun but windy-cold Providence, Rhode Island brewery hop; and New York in April for the Black Party. Tom and I did camp for three glorious nights within Pinnacles National Park where we watched the full moon rise several times and trampled lonely meadows.

I built some of my best art in 2019 despite intense work weeks. In the spring, I put together 4 Snowflakes and finished the second attempt of a Sphere. For the first time in my art career, I took apart and rebuilt an older piece: the 4 Squares. I rewrote LED software – both the Python showrunner and Arduino sketches to put together a professional LED package that “always be fading.” In the fall, I snaked LED strips through white pools to construct a dendritic Tree.

I can’t hold on to everything. I discarded old art pieces. On to the rubbish pile went the tired Triangles and the Eels. I’m lighter, throwing out 800 pounds of dirt, timber, a Burning Man bike, two bike wheels (neither mine), batteries, old electronics, and heavy steel pipe. 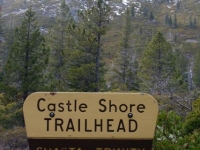