2021 may have fared even worse than the miserable 2020 as the pandemic dragged on for an unexpected further year. We got vaccinated, but still many venues remained shuttered. How much longer do we wait?

2021 brought too much illness. In February, my Mother was diagnosed with Alzheimer’s disease. Before her condition worsened, she would confuse sons’ names (she has four), but as the winter progressed, she mixed up her husband with her father. In the early stages, she grew frantic, despondent, confused, and difficult. My brother brought her to the emergency room when her nerves broke. The police picked her up twice wandering. The family fractures now trying to deal with this new condition. My brother Rob and my father have stepped up to provide care, but their days are long and neither are known for their empathy.

Stephanie got diagnosed with cervical cancer, facing a difficult choice of surgery or chemotherapy. Even a successful outcome to eradicate the cancer will be life changing for her. So much to bear at such a young age. She rallied a crew to help her through December chemotherapy and radiation treatment. I hope 2022 will be brighter for her.

I spent so much of 2021 at home, frequently not leaving my tiny apartment for days in a row. I worked, worked, and worked remotely. Oddly, 2021 might have been my most productive career year. I hired, rescued a faltering chemical line, wrote a ton of software, set guidance, and directed a company that needs leadership. The more I step up to make clear decisions, the more the executive team admires my work. In late spring, after finishing a course of vaccinations, I returned to the office for at least two days each week.

In a year of reduced expectations, I did manage to travel. To check in on Mom, I flew out to Boston in April, June, September, and November. The Dudeks may have celebrated their last Thanksgiving at 311 Grove Street. We put together a marvelous dinner spread with John’s kids remarking that their uncles cook better than their Dad. Playing games with the nieces Sasha and Isabelle, I’m hopeful for the younger generation. Sasha applies this winter to college.

For a week at the start of summer, I slept in six states (California, Ohio, New York, New Jersey, Massachusetts) and two countries (US and Canada). For a quick trip to Quebec City, Ray and I entered Canada on the first day American tourists were allowed. We ate well at some fancy restaurants, slummed at some bars (including one that had free video games), and biked through a downpour to get Covid tests so we could return to the US.

I finally overcame a fear of public speaking. Ray invited me to guest lecture at his college chemistry department in Ohio. Although Covid made tricky an in-person talk, I’m glad I spoke to an actual room of people. Later in May, I repeated the same lecture (but virtually) to John’s Hartwick chemistry department.

Spinach, Giorgio, John Ginoli and I drove up to wooded Guerneville for a May weekend in the woods. It was so strange to enter an indoor bar. We met two ladies in biotech that got crazy drunk and were escorted later out of the bar.

I kept building LED pieces in my apartment, finishing off my last pieces. My weekly jog over pentagonal sidewalk tiles prompted me to make the Pentagons pieces. I finished up the Q-Bert set, built three Turtle Shells, and borrowed Adam’s geometry book to construct a Small and Large Mandala. I now store 12 sets of large-scale LED pieces.

In the fall, I resumed installing these art contraptions at venues although I frequently skipped attending the actual events. I set up 6 Fish for the Autumn Lights Festival in Oakland. I brought the Pentagons to Polyglamorous, the Hexes for Comfort + Joy’s NYE party, and Pentagons back for a Touch party. Crowds are still challenging for me although I’m desperate to be social again.

My health holds. I still run weekly to the ocean to say hello to the soothsaying buffalo. I stopped my daily pushup routines, but I keep up with Tim’s Yoga conducted in my bedroom through Youtube. My back and shoulders ache more, possibly from so much typing for work at my living room table.

It was a year of video games. Ray and I communed over two-hundred hours playing a fantasy role-playing game called Divinity Original Sin 2. I dove into the game ocean in Subnautica and tried other indie games.

My circle may be far flung but it grows more convivial. Ruben and I visited each other frequently, even taking a spin for the day to Napa. The gang flew out to Flagstaff for some fun followed by several 114ºF way-too-hot Las Vegas days, three of which ending with $1500 dinners. I talk a lot to brother Ray. 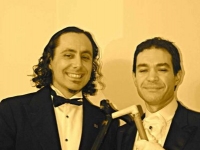