I pulled a dusty United States atlas out from under my car seat. The map’s cover has fallen off and the brittle pages have yellowed. This atlas was formative in May 2007 when I quit my job, divested an apartment, and bought a car. 2007 was an iPhone-free world, so I used this map to point the car to the next destination on my trip from Boston thru New York, Chicago, Mount Rushmore, Yellowstone, to the Pacific Ocean. Early 2008, I re-opened the map to wander back east to Denver, then Austin, and far out to New Orleans.

Looking through the atlas, the United States read vast yet intimate. What does that squiggle representation of a lava bed actually look like in the corner of South Dakota? What if I went north through Idaho instead of east into Iowa? Cities on the map are reduced to the barest collection of highways and landmarks. The country looks infinite in undifferentiated taupes and mauves. It is easier to travel virtually on the map by flipping pages to the “U” of Utah than to actually motor the long hours through the Great Salt Lake flats.

Now spring of 2014, I return soon into the vast world of that atlas.

After six years at this job, I have had enough. I reached my growth ceiling, capped my earnings, saved enough, and frequently find myself at work more bored than productive. Another year here would mean another year of safe income, but also one less exciting year of my life. I have recently grown so much through suffering and reflection, that I want to take on the road what feels like a new me.

My plan, then, is to leave work in April, not take on another job, and spend one year away from career. Six months into this sabbatical – October, I will start looking for work. My savings could stretch thinly to cover three to four years away, but I would like this break to be only twelve months.

On a blank sheet of paper, I wrote the headline: what would I do with a year? I have begun populating that open space with intentions like race a triathlon, spend 30 days with my parents, go on a long silent retreat, and see Nepal or Cape Town or Crater Lake.

My current thoughts are to drive out from San Francisco early April and head east through national parks to my brother in Ohio. I shall spend a week or so with him before landing in May back with my parents near Boston. After a month or so in New England, I return slowly west in July back in San Francisco. Travel and plans get fuzzy after July. There be Burning Man and home projects and some international travel.

The strangers to whom I pitch this idea of a year away initially find the scheme  catastrophic – how will you provide for yourself? – and then exhilarating – I wish I could do that! A dinner-party guest counseled a blog so he can follow my travels and temperament.

In spite of the encouragement, I am fundamentally rather scared. With my work colleagues, we are what we profess. I am foremost a chemist, more particularly a surface chemist. What happens when I leave the job? What do I become, if not merely a failure? This escape could be a quitter’s retreat rather than a hero’s journey. Certainly, the management strata at this job won’t support this departure and fear the echo of anarchy for those that stay on. Whaddaya mean, I can just walk away from this job?

I am so forcibly scheduled that I fear I may flounder with so much time and space. What if I end up like Elvis, eating bon bons all day on the couch watching daytime television? What if I can’t ever find meaningful work? Do I drift away from life, like an unmoored astronaut? What if this hiatus permanently marks me as difficult and unhireable? The path rarely taken may be filled with brambles and adversity.

Nonetheless, the more I report my upcoming departure, the more the path coalesces into inevitability. Staying on to suffer another year has become almost unthinkable. Instead, I re-open that old atlas from underneath my car seat and wonder what Montana might look like in May. 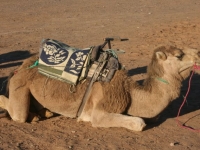