Today is AJ’s Day. I met Alex in graduate school at Stanford University. He had just arrived, while I had been there already for a year. My mother, who taught him at Brandeis University, sent him my way. I convinced him to join the Zare lab.

Some world travel later – me to the Netherlands and Boston, AJ to New York – we ended back in the Bay Area where we have since lived for ten years. Coincidentally, our jobs tend to be situated in adjoining areas, so we meet weekly for lunch.

Alex, now with a five year old son and connected to a wife, finds harder to speak with folks his age about pressing issues of science, career, and life. Many of his peers are likewise cloisterly married or have moved away. So we help each other with relationships, lab problems, and job choices.

As his job moved over the summer down south to Redwood City, I have not seen him for quite some time. However, his wife has given him a leave of absence of 24 hours this Saturday to come north to San Francisco for the day and night. I have plans.

Nothing crazy. We’ll hop the N-Judah MUNI out to the ocean, sit on the beach, and then walk west back into Golden Gate Park and past the areas I know well: the windmill, the buffalo paddock, the lake with the model boats. When it gets dark – the sun sets at 5 today – we’ll have a hot beverage and take the MUNI back home.

We’ll make pasta, cook spaghetti and meatball, throw together a Caesar salad, and bake garlic bread. As his birthday was this past Wednesday, and his wife often forget it, I’ve made him a birthday cake. After dinner, we’ll play a board game of his choosing, then amble down the hill to Zeitgeist for a beer or two.

I hope I can give him a break from family, show him that life can be interesting, and get his advice on my upcoming job interview. We’ll have a fine outing. Nothing crazy. 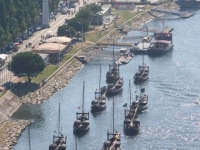