My journey towards my next job starts with reconnection with my base. Over the summer, I flew home to stay with my parents near Boston. Soon after, I visited brother Ray in Ohio. Late summer, I rode the train up to Sacramento to see Ruben. I even had lunch with my former Stanford chemistry Ph.D advisor. I didn’t get the holistic debrief about graduate school that I wanted, but I did make the effort to reconnect.

Last week, my last boss at PacBio pinged me about a visit. I had not been back to my old company in Menlo Park for over three years. I knew the place still existed (barely), but did she even still work there? On Friday, I hopped the commuter Caltrain south from San Francisco for the one-hour ride (ug) into the suburbs of the Peninsula. Despite getting laid off recently and still lacking a job, I wasn’t nervous to meet old colleagues. These days, I’m stronger as a person and more confident of my life choices.

Over lunch, I learned that PacBio has consolidated from its six motley buildings into one building situated near the Facebook megopolis. I was surprised how many of my former coworkers are still at the company. Yes, four years isn’t that long, but in the software industry, engineers tend to change jobs rapidly.

There was a marriage, a divorce, and some new children. Nonetheless, my former coworkers were surprisingly the same. I’m learning that most people, for better or worse, don’t change. I’m trying better to deal with and accept their constancy.

Colleagues gathered in a little break room to hear my tales of life outside the walls. At points, I had trouble admitting that I got laid off. I’m no longer a “we” and cannot refer to “my company.” I have been cast off from the ship and am drifting in open water.

I did note some difference between a biotech company and a software-driven medical diagnostics company. The biotech’s organizational structure is highly pyramidal as science experiments require a lot of junior lab-tech labor. An engineering company can have a flatter org chart. Information at the biotech company is disseminated through formal scientific presentations. We rarely presented work at the software concern, relaying information more often through internal ticketing and chat applications. The software company declared itself paperless, whereas the biotech company clung to its printers, desk phones, and cubicles.

Despite the differences, I felt akin to the small group of mostly Ph.D scientists that gathered that afternoon in the break room over coffee. With their frumpy clothes, patient listening, and joy for discovery, I realized that these are my people. Little had changed. The sequencing technology was still only one year away from market penetration and profitability. I could almost accept a job offer at PacBio that day on Friday, resume my old desk on Monday, and continue where I left off my life four years ago on April 4, 2014. Life doesn’t need to change quickly. 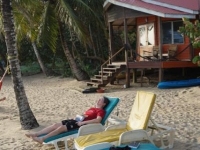