I have attended the Great Dusty now fifteen times, each visit quite different from the one before, less because the hot flat desert changes and more because the adventurer – me – grows so much from the experience. Burning Man stretches, shapes, and tempers me more than perhaps any other pursuit. So what did this final year bring?

When asked, returnees focus most often on the elements as weather out there is difficult to ignore or avoid. 2015 shall be known for its relentless dust. Temperatures dropped Saturday, the day before the event opened, whipping up a thermal front of high winds. Gales ripped tarps and tents, even hurled a geodesic dome cartwheeling two blocks over an RV to impale its jagged metal spider on a truck. In the midst of the storm, John roused us Sunday morning to stake down our carport living room with ratchet straps and rebar.

Although the winds never blew again harder than that Saturday, dust continue to pummel relentlessly for the next several days, filling cereal bowls, coating bins, depositing as dunes in tents, and lodging in lungs. Brooms were useless, dust masks didn’t help much. We coughed and hacked and ate uncounted spoonfuls of the gray stuff. Many veterans midweek were already exhausted.

A few days before the Burn, another storm dropped the temperature further. making bearable cavorting in the afternoon sun. However, the cold on Saturday’s Burn night hovered in the upper thirties. I bundled with layers on my warmest clothes. The unprepared froze or retired uncharacteristically early to hide in their frozen beds.

Nonetheless, we survived. Nobody in our close community got either sick or hurt. I avoided dysentery, stayed upright on my bike, and did not fall off tall structures – simple things, but pitfalls abound that can sunder the week.

For me, it was more a year of great art than dancing. I chunked off afternoons and evenings for brief bike tours of art pieces, both great and small, the best of which I highlight below. No massive piece amazed me as much as previous works like Big Rig Jig or the famous 2007 Waffle, yet the flaming Serpent Mother certainly delighted on its return trip from its headquarters at the Flaming Lotus Girls. As a nascent installation artist, I relished the smaller unexpected works that were well intentioned and executed.

I did dance, but mostly at and on the giant sheep art car as it rumbled through the Playa, fueled with a massive sound system and orchestrated by an impeccable cast of DJ friends. No need anymore to tarry anonymously in the massive darkness of sound camps like White Ocean or Calliope. Major played an incredible Friday night set on the sheep at Honey Dusted. During the frantic night of the Burn the sheep’s music echoed magically.

It was a year of wonderful and unexpected love. I found a home with just one special companion. Before I left to the desert, a quick text to an old friend to arrange an early week rendezvous initiated several nights of laughter and insight. I thank Stephanie so much for her patience, acceptance, and cheer. So easy all these years to be everywhere and with everyone on the Playa; so much better to make one good friend. She never did keep the owls away.

I succeeded. From my first year sweltering in a tent, dying all day with insatiable hangovers – this year, I achieved competence, even expertise. I can take care of myself, structurally with a shade quonset designed by Tom Landers, nutritionally through meals prepared in our camp kitchen, and psychologically with rest, awareness, and balance.

My drugs were not too strong, my benders were not too long. I slept and ate. Although most evenings I saw that telltale sky glow over the mountains likely around 6am, I quickly fled home to sleep before the awakening of the sunrise owls. I appreciate having enough and desire not more.

My red-furred, top-heavy bike sailed the Playa, equipped with two light-up wings. I installed over 1000 LEDs for two different art projects – the three Roses and the six Triangles – at camps near each other. Both projects kept blinking all week through dust storms and after power outages. One night I donned a hedgehog, the next I transformed into a Roman centurion, and on a third I roared as Max from Where the Wild Things Are. It took more than a decade of flailing attempts, yet I’ve figured It out.

Likewise, the BAAAHs camp of eighty cohered well on its third visit. Sean masterfully planned simple but exquisite dinners every night. Major and I grilled salmon, fried snow peas, and boiled couscous on Saturday night. Shelby ensured delivery of enough potable water and the removal of gray water from our plumbed showers (sick). The exterior bus lights shone nightly as our small piece in the giant project. Although the sheep blew out an eyeball, we improvised first with a unicorn horn and then with a rush delivery of new halogen lightbulbs from Minnesota.

I relearned the same Playa truisms: do get most of your project finished back in San Francisco, and don’t attempt complications in the desert. The lighting crew never made Y-connectors to hook up more lights, but I’m fortunate that my personal installation pieces were simple to hang up and plug in. I learned again that I prefer the intimacy of a six-to-twenty person camp over a larger organization of a hundred people. With so many, I don’t know often how properly to interface, as I may be fundamentally a loner, so I feel guilty or absent. Nonetheless, art and infrastructure as large as a two-story sheep art car requires many, many hands.

On the one hand, the actual Man stood smaller and perhaps more disappointing this year as it was not possible to climb up and into him. Nonetheless, some of the Playa’s best art surrounded him. On the other hand, the triangular Temple proved a sublime alternative the previous elegant David Best temples. I quite enjoyed my shrinking solemn spiral sojourn through the temple gates.

For 2015, I joined an informal conference of artists. I met new creative friends and strengthened ties to those working on projects. In my small way, I bring along my own work to add to the colorful ensemble out in the desert. I see ahead fruitful (and scary) collaborations on new works bigger than myself.

Back in my San Francisco apartment, my bathtub is full of mud made from dust plus water. I just accidently laundered a headlamp. Over the course of a week, I have outfits to repair and camp equipment to clean. I await a bin and my art pieces arriving this weekend on two trucks. I’m glad to be back. 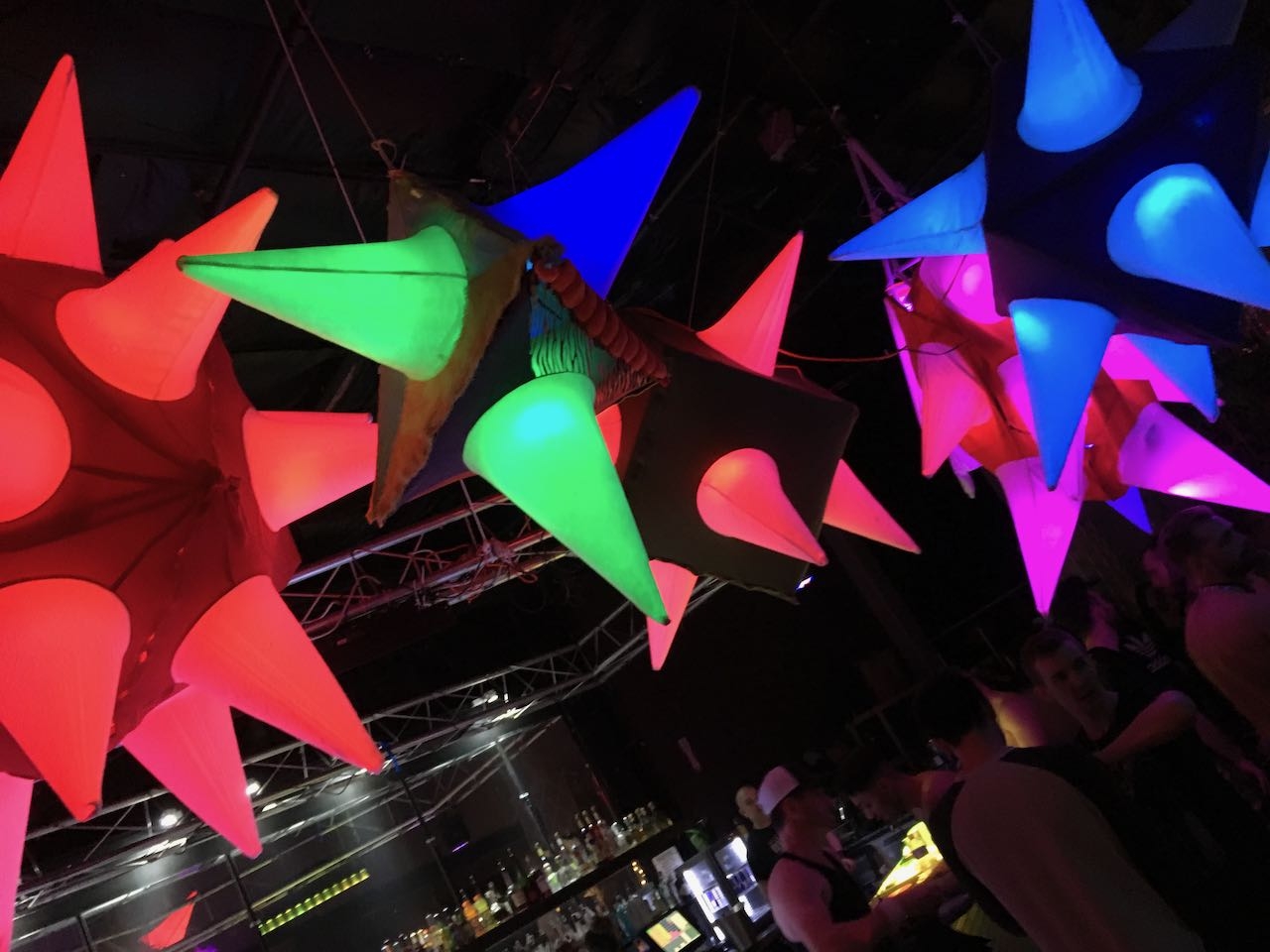