I’ve never been to Grand Rapids, Michigan, but I had heard of the funky little city abutting Lake Michigan that hosts Art Prize. The temperature dropped twenty degrees on our van trip north from central Ohio through a corner of Indiana and into southern Michigan. Corn fields were flooded and the gray skies threatened more rain on the flat plains. Although Michigan college kids scream, “Go Blue,” did this battleground recently vote blue or red?

Grand Rapids spreads compactly across seven bridges on either side of the Grand River. The city started because of the mills for dry goods like flour and has kept going with furniture making. City architecture points towards red brick and beige concrete than colorful Victorians or zippy murals. Everything felt serviceable, sensible, and clean. Coming from shitty San Francisco streets with its intertwined homeless and drug crises, I felt refreshingly safe and at ease. On Saturday morning, joggers raced among urban orienteering baskets. Throughout our stay, few people were out on the streets, as if the city had already emptied out for season. We poked into alleys and under bridges in search of art, not danger. Fortunately, most museums, like the Gerald Ford, were free for this last weekend of Art Prize.

Yet  the longer I stayed, the more discomfort I felt with Grand Rapids. The scions of Grand Rapids are from the DeVos and VanAndel families who started the Amway Corporation. Betsy DeVos, the current  evil Secretary of Education, champions faith-based learning and campaigns to defund public schools. Billboards just outside of town told Christians what to do or warned of the evils of abortion.

In subtler ways, diversity was absent in the populace. This is wealthy, white America, both earnest and smug. There’s nothing funky about Grand Rapids. People dress more conservatively and plaid never left. The bustling Big ol’ Building had a few African Americans, but anything gay or alternative would be quite hard to find, likely because it’s been asked to move elsewhere. Edginess have been ground smooth. 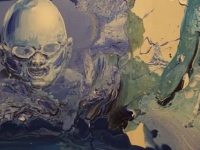