100 days on the road feel like years. I have done much, I have done nothing: Ticket to Ride board game in Seattle, running riverbanks in Missoula, comic books in Toronto, platonic solids across the country, anniversary dinners, art museum adventures with my parents, 3am Times Square madness. Yet constant motion leaves shallow roots, passive looks out speeding car windows, and quick hellos soon followed by fleeting goodbyes.

Both Saturday and Sunday morning in Yellow Springs, I’m asked soon after I awake for the “dueling cellos.” Over three days, Ray, Lee, and I watch sixteen episodes of Game of Thrones. Although 16 hours is a lot of television, I am happy for the rest and conversation.

For my last weekend in central Ohio, I had planned for the “Greatest Hits” with a last run in John Bryant State Park, a last bicycle ride to Xenia, and a last hit of baseballs at Young’s Dairy. None of that happen; Ohio baked instead.

We did walk through Glen Helen State Park, quite close to Ray’s apartment, to visit the raptors and our previous morel mushroom spots. I have a great fear of raptors, so I was happy to roar at captive owls, a bald eagle, and some gnarled vultures.

Ray’s Columbus friend, Katie, invited us to her apartment on Saturday afternoon for a grilled dinner. Ray, Lee, and I could not figure out whether we would snack or dine at her apartment Presented with such an amazing spread of grilled meats, we dined. Afterwards, we joined Katie and Jason in downtown Columbus at a bar called 16 Bit for beer and free video games. Lee, Ray, and I destroyed city buildings on the venerable video game Rampage.

Sunday afternoon, we cooked much to host the final World Cup soccer match. I made pita bread and guacamole. Ray put together brownies and salsa. So many familiar faces came to watch Germany score the single overtime goal over Argentina. 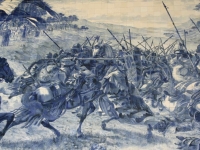