In the morning, I say goodbye to Rene and his two kids after a few battles with Quentin on the Wii. I’m sad to trade this home for the loneliness of the road, especially now I lack friends until California. There be a long, open road ahead of me over the western plains.

I pour more oil into the ailing engine in St. Louis and again near Kansas City. I’m not sure I’ll to San Francisco, but I reassuringly tap the dashboard of the Toyota when she labors up highway hills.

I check Yelp to locate a well-regarded restaurant in Kansas City, so I drive to an industrial part of town. I find Pigwich, a gourmet butcher that cooks out of a pop-up trailer. I scarf a tasty cheesesteak next to group of cops and soldiers. Some look with confused amusement at my car’s California plates. I’d like to explain that I was just stopping by Pigwich en route from Boston to San Francisco.

What makes a city? From the churning highway overpass, I spy downtown Kansas City on the western edge of Missouri. I wonder whether this little-known town has undiscovered gems for me. Artisanal coffee? Craft brew? Burgeoning glass blowing? Instead, I take the highway interchange over the Missouri River and into Kansas.

On this western trek, I have visited three new states on my quest for 50 before 50: West Virginia, Missouri, and Kansas.

The Midwest kids back at Ray’s brewery recommended Lawrence so I find myself checked in for a night at the Virginia Inn in Lawrence, Kansas. I haven’t been alone-alone for weeks. I much rather sleep and read in this motel room than explore the University of Kansas. Nonetheless, at six, I get off my tired driving ass and see what this town has to offer. 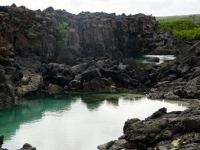