L and L, Lawrence and Lincoln, the two cities recommended by Midwesterners back at the Yellow Springs Brewery. As I have never visited Kansas or Nebraska, I spend one night in each L.

Together, the two cities resemble Austin, Texas. Lawrence is funky, or at least this Bourgeois Pig coffee shop in which I type is funky. I spend the afternoon drinking happy hour gin and tonics and canned beer. The Bourgeois Pig clientele could live in San Francisco without the Bay Area’s overwrought artifice. I scarf down barbecue for dinner.

The next morning, I join the Lawrence crowds on the main drag of Massachusetts Avenue for the city’s big summer event: a sidewalk sale. Too bad I don’t need anything. I could live in Lawrence.

Lincoln contains the rest of Austin: a tall capitol building, thundering streets, and desiccated vagrants. I drink a lonely afternoon beer in a cocktail bar that once was the backstage of a theater. Perhaps I did not find the right area downtown, but Lincoln lacks the character of its namesake.

I have an unrequited love for state capitol buildings. Some capitols, like Nebraska, are situated next to the state’s major university. Other capitols, like Washington, are relegated to forgotten backwaters. Most capitols are phallic. Lincoln features a tall campanile tower topped with a bronze statue of a corner sower. My favorite capitol is the unphallic Hawaii.

Personalities develop on road trips illustrated by preferences. The road has so much choice, so what I choose to see and do? I frequently stare at art, drink beer, and wander university campuses. I look unrequited for the brewery in the university art gallery.

I graduated from college 20 years ago, so why am I still drawn to fake gothic piles of brick? Just before leaving Lawrence, I park the car near the gym of the University of Kansas to have a walk about. I climb the hill and walk past the bookstore, tour groups, art studio with rhino art car out back, fountains, and lawns. In case my biotech career falters, I locate academic buildings for military science and exercise science.

On the same day, but eight hours later, I walk the University of Nebraska campus at Lincoln. Here the football stadium looms prominently in the university center. I find the chemistry building and then a bronze mastodon outside the natural history museum. A plaque reports that almost every county in Nebraska contains mastodon fossils. Summer kids play tag.

On my trip east, I hit the big tourist cities, like Toronto, in early spring before the crowds. Perhaps summer is the time to hit the big college towns, like Lincoln and Lawrence, when the crowds are away. Both college campuses are deserted.

This afternoon, I crossed twenty miles of the southwest corner of Iowa. I even parked at the Iowa welcome center. I did not see much. 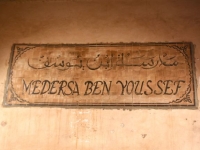