10:56 am. I’m sitting in my car on a deserted block of Grand Island, Nebraska. I’m staking out the dodgy Vietnamese restaurant across the street, waiting for it to open so I can eat lunch before a long drive along highway 2 through the empty Nebraska prairie. I’m camping tonight, I hope.

The topography has changed since Lawrence, Kansas into dilapidated flat frontier with fewer trees and scrubbier buildings. I feel the west already. Cultural sites dwindle; natural splendor abounds. I have a long way to go until California.

I camp for the night in Scottsbluff, NE by a small river, railroad tracks, and lots of RVs. I cook a simple dinner on my stove and pitch a tent. I’ll retire soon when full darkness descends between 9 and 10 pm, aiming to wake just after sunrise at 5:30 am to “fix” breakfast, make coffee, pack up, and go climb the nearby national monument.

I drove over 300 miles today, perhaps my longest day yet, from the east side of Nebraska at Lincoln to the west side at Scottsbluff. I got off of thundering Highway 70 north on to scenic route 2. The guidebook counsels a full tank of gas. I worry about breakdowns on this desolate stretch of central Nebraska. Highway 2 proves not as desolate as cautioned, compared to Nevada’s highway 50, the loneliest road in the United States.

I try to take pictures from the car window but the topography is too flat and the car moves too fast. Here are some recollections:

Orange and yellow locomotives pull long lines of coal cars on tracks that follow the highway. Quite a lot of coal moves through Nebraska.

July is the month of highway construction because of the fair weather and the availability of summer help. I follow many pilot cars down one-lane highways.

The tall spire of Chimney Rock. I reached Chimney Rock at the same time as I got to the Nebraska capitol yesterday: 5:05. Both monuments close at five.

I planned to camp the night at the Oregon Trail campground. I found there the empty husk of a frontier town. Panic not. Move west, young dinosaur, to camp in Scottsbluff. 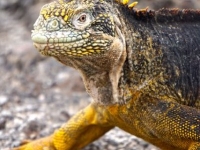