I wake at sunrise in my tent by the Green River in Dinosaur National Park. I brew coffee and make oatmeal while I pack up the car. I will miss campsite #10 with its own beach, army of rabbits, and eager chipmunk.

I drive further into the park to visit a homesteader’s cabin. One woman, Josie, chopped wood, raised animals, grew crops, and knit for 50 years alone in this cabin in remote Utah. She lived here doing “man’s work” until she died at 90.

I climb a short trail into a box canyon. My roars and bloops echo off the canyon walls. Having seen warnings at the trail head, I fear for mountain lions and bears.

I drive down the park road to inspect petroglyphs on the rock walls. About six hundred years ago, native tribes carved pictures of faces, figures, and lizards

The sun is high in the sky: time to head west. I drive highway 40 to Salt Lake City. The car labors up unexpected hills. Along a crest of thundering highway 80, I’m barely motoring at 40mph up a highway whose posted speed is 75mph.

Salt Lake City feels like the hottest city I have visited, and I don’t mean interesting. I scarf down a lunch sandwich at the Robin’s Nest, a well-recommended deli and deservedly so. I have two hours on the parking meter to tour the downtown creepy Mormon complex. I check out the Tabernacle organ and avoid the earnest tour guides. There are so many Asian Mormon faces!

The Utah Museum of Art at the U of U is closed on Mondays. It is Monday. I go instead to the Capitol Building, perched on top of the city in a thinly-settled part of town. Resembles the nation’s Capitol, the Salt Lake City version bursts with marble.

Along the four-hour drive to Elko, I stop at Utah’s empty, epic whiteness of the Bonneville Salt Flats. Another afternoon thunderstorm hurries scattered rain and lightning over the mountain range that separates Nevada from Utah.

The car barely makes it to Elko, Nevada. I feed the old Toyota another quart of oil. A sympathetic man in a jalopy offers more.

I check in at Stockman’s Casino and Hotel. The recently renovated hotel rooms have increased in price. I settle into a pleasant room with a king bed but no exterior windows, just a view off an interior cowboy-themed courtyard. I eat a tired dinner at a pizza place across the street that has also has an ice cream shop, bar, and bowling alley.

300 more agonizing miles across blasted Nevada to Reno. I spare the car’s air conditioner lest the engine burst. I stop at a desert rest stop to add more oil and get rid my own “processed” water. Today’s 400 total miles may be the longest day so far.

I’m delirious with exhaustion, waning from the muffin I had for muffin. I see a mirage of two men walking on the highway that shape-shifts closer into two signs.

At 2:30, I pull into Reno’s Laughing Planet, a brilliant olive-green café that serves vegetables. So glad for a friendly place, I over-order beer and iced-T. A different plastic dinosaur roars on top of every café table. I happily roar back at my dinosaur.

I pour two lucky quarts of oil into the car’s engine to prepare for the Sierras. These mountains killed the Donner Party.

I zoom out of Reno and roar at the California state line. I have reached the promised land of fruit, ocean, and technology. The perky California agriculture inspector waves my car on into the Golden State.

The Sierras trouble the car not as much as the lesser-known feisty mountains in Wyoming and Utah. Nevada’s desert gives way to California’s tall pine trees and alpine streams. I turn off the radio for more roaring.

I descend into the Central Valley and reach Sacramento. I’ll spend tonight with Ruben. I’m happy for this one-night Sacramentan air lock to concentrate on just one person and not all of San Francisco.

Quite soon I trade the new every moment on the road for familiarity at home. I’ll miss the adventure. 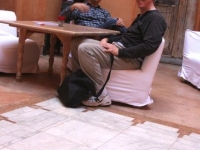