Was it Stella that got her groove back? My San Francisco groove came back last night at a party.

The BAAAHs Burning Man camp hosted a fundraiser Friday night in a dilapidated space in San Francisco’s Tenderloin. The “Bad Sheep” organizers asked the five of us on the lighting crew if we could light up the event space. Sure.

Saturday afternoon, John, Jason, and I put the three large hex arrays in the back of a rental van. I added Platonic Solids parts to the pile. Greg met us in the Tenderloin to unload the lighting equipment into the venue.

The venue was not what I envisioned. Counterpulse Arts Collective recently bought an abandoned adult movie theater in the worst part of San Francisco. Before fixing up the place, Counterpulse offered up the decrepit theater for events.

The ground level had a barred entryway, an odd movie theater with about 50 moldy red seats, and two bathrooms that drained into the basement. Yes, the pipes dumped sewage into the basement dance area. The building custodian called for an emergency plumber. Meanwhile, the four of us were among the few setting up for the event.

With the mandate to make something cute, we hung in a row the three hex panels in the basement, sat the octahedron and tetrahedron on chairs in the theater, and decorated the entryway with Christmas lights draped over jagged, triangular, metal panels from the sheep bus. It looked so thrown together in this decayed concrete theater, but…

Five hours later, the party looked grand. The crowd arrived, cocktails were served, and the DJs played. I reconnected with friends I had not seen for four months and met some wonderful new people. I was bouncy, social, and happy. Finally.

This party may be the apogee of my event planning. Our crew created the look and feel of the event. The hexes winked brightly, the platonic solids chattered to each other, John helmed the turntables for the final 2-4 am shift.

Eleven o’clock turned into midnight and suddenly it was four in the morning. I started to walk home up Market Street until a taxi flagged me down for a drunken ride home. 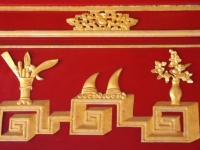