Twice a year, the American Chemical Society hosts a general meeting in a different city. This week, ten thousand chemists descend on San Francisco. Over the past twenty years, I have attended many ACS meetings, most of them in San Francisco. At these meetings, I have presented posters, attended lectures, and met former colleagues.

This year, I don’t care. My heart is in the electric sheep, not in chemistry. ACS conferences are relics of my past, something provincial and esoteric with rules and goals that no longer are mine.

Last night, I did meet Janan and his friend Rahm for dinner and drinks in Union Square. I worked in the same Austin lab as Janan from 2001-3. Janan is now a successful professor at Tulane University in New Orleans. We talked a little about chemistry, but more about urban planning, computer programming, and our visions of the future.

I worry that chemistry may be behind me. 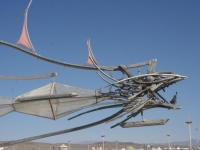