A man was attacked late Saturday night by Duboce Park near where I live. He was beaten badly and left for dead. Authorities identified the victim as Feather Lynn, a radical faerie of San Francisco, and contacted his family. His assailant remains at large. Poor Feather did not recover. His parents took him off life support on Tuesday afternoon at 3:33pm.

A group came together at 3pm in Duboce Park near where Feather was murdered for a vigil and funeral to hold space for Feather as he passed from life to death. We circled to say words, lay flowers, and be silent. I have never before born witness to such an agonizing end.

Here today, gone tomorrow, none of us are prepared for death. I knew of Feather from community events but did not know him well. I cried for the tragedy, for the sudden violence to someone like me, for the horror of San Francisco.

The vigil stunned us into mute dormancy. Afterwards, a smaller group retreated to a bar. Eventually our mood lightened. It had to for survival under the callous biological imperative to move on.

Through joy and tragedy, we find our family in San Francisco. I do not know everyone of this grieving group, but some I know better than my biological family. I’m proud we came together to mourn one of our own. I’m so sad and so angry. 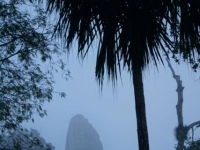