The film I wanted to see got switched last night at Missoula’s historic Wilma theater to a film I already saw three weeks ago. Kids outside the theater queued to see a band called Yelawolf. The same band follows me the next night to Billings. I should save movie by enlisting as a band roadie.

Film quashed, I slept fitfully back in my Missoula Motel 6 to train whistles, a guy screaming down the hall, and growing anxiety over the road trip and my lack of career. What the hell am I doing in these little towns? What am I trying to prove? How much am I spending? Airplanes are starting to look convenient.

I breakfasted again at Missoula’s most excellent Parisian bakery, then hit the road east. Now that I have called your frumpy sisters Bozeman and Billings, I quite like you Missoula.

I stopped in Bozeman to commune with my people, the dinosaurs, at the Museum of the Rockies. Montana has some of the world’s best dinosaur digging because Montana was a bustling lakeshore during the Paleozoic Era, increasing the odds that shore sediment rapidly covered dead dinosaurs. Furthermore, the Montanan rocks have been neither eroded up from the top nor melted down by submersion. Dig in much of Montana and you’ll find a fossil–not necessarily a dinosaur as more recent plant and vertebrate fossils also abound.

I was surprised at the high level of explanations at The Museum of the Rockies. This is a museum for adults. New stuff I learned: dinosaurs were likely warm-blooded; tails did not drag on the ground; the tyrannosaurus rex was a scavenger–there were smaller, better killers than the Rex; many of those odd dinosaur features like the triceratops crest, stegosaurus paddles, and horns were for sexual distinction and age recognition–not for fighting. As the triceratops grew, its horns turned from upwards to downwards and its crest bone formed two large holes not for strength but for lightness.

The museum shows a mixture of actual fossils and casts. Most of the exhibited fossils looked dark black, but fossil color depends on sediment. In a sequestered small room, lab-coated geologists actively cleaned rocks. I wanted to romp and roar in the dinosaur play area, but the silly sign said for children up to 8. Their children’s stegosaurus puzzle looked fun. I got inspired to make four more light-up dinosaur outfits.

On the picnic tables outside the museum, I gnaw on salami, hard cheese, and a French baguette from Missoula. I can pretend I’m a scavenging T. Rex. 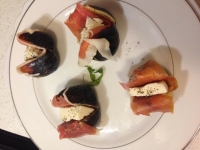