I heard of the man who stopped working at work.

A friend works for a large Bay Area science company. His boss recently assigned him three employees to help him on an ongoing project. This friend vetted two of the underlings as hopeless but has high hopes for the third. He instructed the third in the project’s procedure and left him to work.

The third man panicked. On the way into the laboratory, the third man confessed, “I do no work.” The third man told my friend that he once did a lot of work for the company, but his work was invariably mismanaged, wrongly credited, or thrown out. Frustrated for years, he decided six months ago to stop doing work. He would still come to work, but just would do nothing. Perhaps someone would notice his lack of work and he would get mercifully fired.

He did not get fired. So the third man comes to work every morning, laboriously checks his e-mail, runs for three hours, drives to a cinema to see a movie, checks his e-mail again, and goes home.

Corporate culture is busted. Government is busted. Organizations do not scale well. At large companies, a few work while everyone else sits. Men and women on the shop floor either work hard and get abused or stop working and hope not to be noticed. I laugh at this third man, but when my previous company similarly malfunctioned, I became the third man. 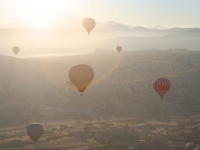