I brought a camera to the Playa but did not take pictures. I have 10 memorable images still left in my head:

Over the years, I have spent an aggregate of fifteen or more weeks in Black Rock City. I have yet to experience rain in the August desert except for a brief shower. This year, the desert rained.

I woke Sunday at sunrise with a pressing need to pee. Trundling to the porta-potties, I worried at an ominous grimness in the sky. When I returned to camp, I piled our belongings and covered them with a blue tarp. I rolled up the car windows and pulled close the tent flaps.

Falling mist hurried me back into my sleeping bag. The skies opened with rain, then a deluge. Fortunately, it was only Monday, Greg and I were dry, and our belongings hid under a tarp. We slept through the morning shower as anarchy erupted.

The event organizers closed the city to cars lest vehicles rut and ruin the roads. Even bicycles stopped pedaling. A brief walk caked platforms on shoes.

I feared for my wet Platonic Solids project in the neighboring camp, but the spiked balls had survived a July deluge in Vermont. We suffered some failed light strips on the sheep bus, but otherwise our group weathered the storm well.

As I get older, I venture less to Center Camp. Greg astutely called this sprawling spot the mall of Black Rock City. New arrivals without adequate shelter loll away the hot afternoons among the acrobats and performers of Center Camp.

Rob suggested listening to John Craigie, the unofficial folk singer of Burning Man. Four of us arrived early to hear the excellent guitarist before Craigie and stayed through Craigie’s wonderful songs. He poked fun at the drama of Burning Man while venerating the event.

I needed to rest my weariness on this Thursday afternoon and was quite happy just to sit and listen to others perform on old-fashioned, analog instruments.

John Major suggested a Sunday night adventure (or was it Saturday night?). Greg, John, and I mounted bikes and headed out towards Center Camp. Over the course of the long night, we three climbed so many empty installations: the tall slender might of Cosmic Praise, the colorful plexiglass pyramid, and the forbidding bulk of Alien Siege Machine.

The evening was a small, unexpected party for three. I thought we might linger briefly, but we returned to our tents well after four and moments before the sky lightened for the oncoming day.

I’m not a nudist. I’m an East-Coast puritan that finds clothes much more attractive on the indecent, bare body. Every year, folks – mostly men – shamble naked on Wednesday afternoon from one bar to the next. I either avoid the event or sneer dismissively.

This year, our camp hosted a bar stop. Greg and I shed our clothes and joined the bodies. We drank some drinks and shambled on to the next bar. Barely I had a lot of unexpected fun.

Thursday night, I encountered my favorite art piece of the year: four 10-foot tall, bronze-ish teapots perched high on lacy steel, steampunk stands. Four skinny ladders led up into each pot so a small group could drink tea within. A small vehicle, currently stationary, could pull the teapot chain along to miraculous destinations.

Mike, Rob, Greg, and myself found ourselves far from home late Thursday night at the rough intersections of 3:00 street and B. I cruised blithely by a large tent for which the others suggested parking bikes and stopping. A sign proclaimed, “Bao Chicka Bao Bao,” and advertised steamed pork buns.

We ventured into a white chaotic lounge café that did indeed serve pork buns. However, the host was not giving them away for free. You had to either do a poll dance, fuck a large stuffed bear, or twerk.

As the bear had retreated far behind a passed-out guy, I spun a half-assed poll dance. The host rescued the large white stuffed bear so Mike could vigorously fuck it – in two positions – on stage. The hosts strapped a mechanical twerk box on a sheepish lesbian who gyrated her ass mechanically until the box signaled enough twerking.

The steamed bun party required lots of energy to maintain. One barker went behind a screen for more restorative alcohol. I was happy in the middle of nowhere for unexpected conviviality and an earned steamed pork bun.

Greg and I originally planned to depart Burning Man on Saturday night while the iconic Man burned. Trouble was, neither of us were yet done with our desert experience. I wanted a little more, a sense of closure, and one last hurrah.

We decided to stay on until early Sunday morning so that we could conduct our traditional Saturday night Deep Playa Art Tour. While the masses gathered by the Man, five of us renegades mounted bicycles and headed out towards the distant Temple and forlorn trash fence for one last nighttime look at art.

We were delightfully accosted early in our journey by a man on a bicycle trailing a bundle of lit balloons. He asked whether we would join his nearby group for a cocktail. I drank a grateful gin and tonic and discussed the surrounding art.

Onward, we encountered mysterious lit-up pieces, the magnificent zoetrope of swinging men, wooden structures about to be burnt, the creepy Last Outpost, and the furthest Alien Outpost.

Only a few art pieces were occupied as the crowds were away hooting at the burning Man. Those we met were often the artists having a last stay with their art on this important Burn night. We learned much about the construction of the Zoetrope and the Last Outpost.

The thick sand slowed biking but we had time and energy. I was so happy to spend some last moments at Black Rock City with my cherished friends.

I spent nine months this year constructing five large platonic solids with light-up stellations. Burning Man culminated the spiked-ball project. Comfort and Joy camp kindly donated money for me to finish and install the Platonic Solids in their blinky courtyard.

This project – my largest yet – worked. The rainstorm destroyed the octahedron’s power supply but the other electronics simply dried out in the sun. I cobbled parts together to fix the broken power supply. Every cone lit up as intended.

Friday, I separated the five glowing balls from their ring formation to spread them out over the courtyard. I engineered the balls to be easy to set up and take down. Great success!

Our lighting group of eight spent many hard months figuring out how to light a two-story wooly sheep. Greg and John bought a massive amount of cheap LED light strips. We stockpiled LN-207 glue from many Home Depots to adhere the strips to the sheep’s metal panels. Greg wrote robust software to send DMX signals to each of the panels and to ensure a clean reboot if the sheep lost power. Along with several others, I crafted a few light shows. Still, we were not sure whether the technology worked.

In the desert, we spent long nights gluing more strips to panels, clipping off electrically-shorted LEDs after one strip set fire, and snaking DMX and power cords from central control boxes to each panel.

Sunday night, the sheep lit all white. Monday night, we lit the wooly head. Tuesday, we added color and turned the sheep kinetically alive. Although we wished for more construction time before the desert, we delivered a brilliant piece of light architecture.

John commandeered the sheep for a Tuesday night ride around the Playa. His plan was simple: depart camp with the sheep around 10pm, return after sunrise. Although I have slept over one hundred nights in Black Rock City, I have never willingly witnessed a sunrise. I fear sleep deprivation and the rising heat that might wreck the week.

Just after 10pm, the merry crew drove the sheep to the Esplanade in front of Boston’s Hive Village. I got to reconnect with some long-lost Boston friends. From the Hive, we rumbled on to Doug Ruuska’s Cosmic Praise, a giant illuminated tower mocked by a neighboring ridiculous clown. As the hour tolled three, we navigated the sheep into the uncharted territory of Playa Art where we stopped next to a treehouse of ladders, an inverted pyramid of colorful classical cubes, and finally a meaty, rotating steel globe.

Major tag-team dj’d with Char who wore a ridiculous skull mask. At four in the morning, a team of eager but clueless Swedes took over the bus’s driving duties. The sky lightened, the crowd grew thin, we knew our future was coupled to the bus. Chris Wagner found us way out in the desert and boarded. Ben Kram biked by on his way to a ranger shift.

Major played a glorious sunrise set. Dennis danced. He had planned ahead and brought along his sunglasses. I had not. No way was I going to stay out past dawn. I did. We drank. We drugged. The Swedish airline crew would take care of us.

Long after sunrise, the bus’s ignition fired and we rumbled across the Playa and down the spoke streets towards home. A car blocked our alley causing much weary consternation. We parked the bus by the car, turned off the engine and lights, collected our trash, and gathered under our Quonsets for a late breakfast. Glorious. 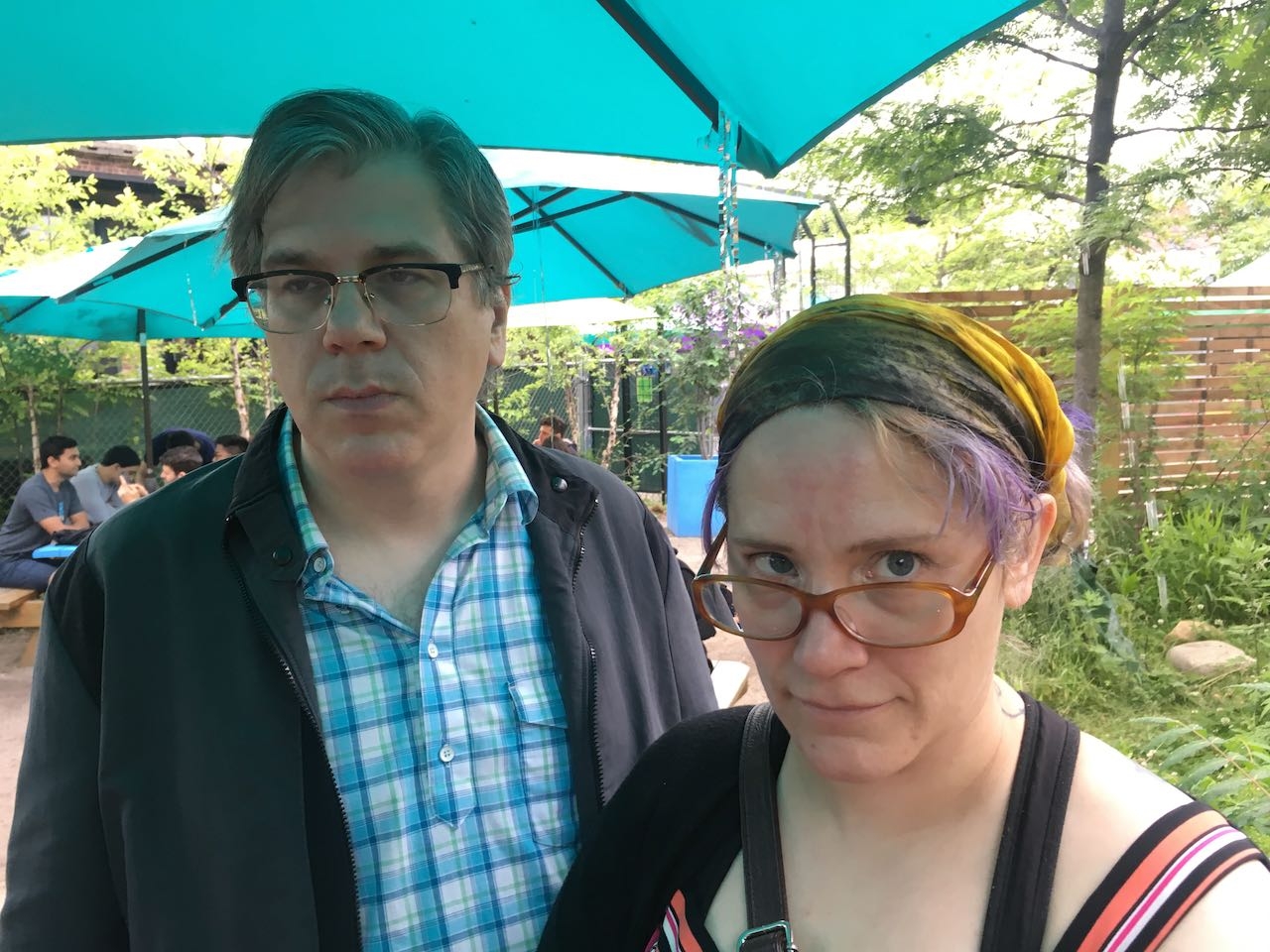