North Dakota is the least visited state, or so says the perky park ranger at North Dakota’s Theodore Roosevelt National Park. Those that strive to see all fifty states often leave North Dakota for last. The eastern border city of Fargo even issues certificates for those that are completing the tour of fifty.

I guess South Dakota’s Rushmore and the Badlands pull the tourists away. North Dakota does feature its own hills and canyons, but the more majestic topography lie south.

I departed woeful Billings and quickly came to a fork in the road. Either I take highway 90 through South Dakota or choose instead the lesser-traveled highway 94 to the north. I’m not going to drive this way often, so why not make it interesting? I headed north on 94.

“I never would have been President if it had not been for my experiences in North Dakota,” Theodore Roosevelt remarked. He first came to the Badlands of North Dakota in September of 1883. He came to shoot a bison.

I came to moo at them. As much of the park is a 36-mile drive, I spent a couple more tortuous hours in the car. I did get out of the car to wave at prairie dogs and hike two trails. This April in North Dakota, I was the only one on the trails.

Several herds of bison roam the park. They ambled unconcerned in front of and behind my slow car. Today the park likely had more bison than people.

More weary afternoon driving brought me to Bismarck, the capital of North Dakota. I didn’t realize the city shelters an unexpected “c”. My Bismarck hotel sits in the midst of a giant strip mall of highways and access roads. I’m overdue for commercial America. Not all places can be hipster coffee shops and used bookstores. 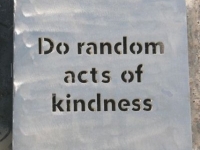