Funny what one remembers from the road. North Dakota is windy. The hotel guy said that when the wind picks up, it just blows and blows with nothing to stop it. Minneapolis has the worst pot holes.

I’m getting better at this travel. I ate breakfast in Billings, had lunch in Fargo, and finished dinner in Minneapolis. For lunch, I found the top-rated restaurant in Fargo, an odd place called Passage to India in a Passage to Fargo strip mall. Still, the buffet was unexpectedly varied and wonderful. Did I mention that this journal would feature the tedium of meals?

Fargo is the land of wide streets and chain stores. It lies on the border with its Minnesotan forgotten sister city of Moorehead. Rivers frequently demark state borders. The two states frequently each settles a city on opposite river banks.

I drove into downtown Fargo for the excellent Plains Art Museum. Housed in a modern wood and steel building, the museum featured one gallery on each of three floors. The first floor featured works from North Dakota and other plain plains states. There were several psychedelic Native American paintings. The second floor had ceramics. I assumed ceramics boring, yet I was surprised to find folded white masses, blue whorls, and boat with bunnies. The top floor of the museum screened one-minute films, commensurate with my attention span. I watched several of the the North Dakotan one-minute entries.

It is early spring in the high plains. Fading ice still clings to some lakes. Snow holds in shadow pockets. Trees are bare and fields are champagne colored. North Dakota does not have roadside crows; two pheasants pecked the side of the highway. Robins return to Minnesota.

So much driving. The ailing Toyota leaks oil at a disconcertingly faster rate. I added two quarts to the engine in Billings and another at a rest stop mid-Minnesota. This road trip may be one-way east. At least now in Minneapolis, I’m only one very long day away from my destination of Yellow Springs. If the car fails, my brother sails out (I hope) to get me.

Always ask the hotel valet guy where to park. I probably shouldn’t be such a cheap bastard as I’m taking his job by parking my own car. Still, the door handle doesn’t work, the engine leaks oil, and I need to rearrange much of the car’s luggage once parked in the lot. 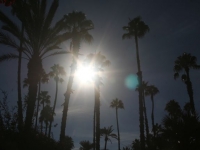