When you are older than 30, no one will plan your birthday – either you do nothing or you decide how you want to spend your birthday. I turned an auspicious 42 on Thursday, September 25. I took ten people to Yosemite Valley to camp for the weekend. Because we are San Francisco party people, almost none of us had visited Yosemite before.

Greg and I pack the car on Friday morning. Having just attended Burning Man, we quickly locate our camping gear and bring along too much stuff. We drive east over the Bay Bridge and south to Hayward where we meet Mike and Rob. Traffic is worse than expected on a Friday afternoon. We motor over the Livermore desert past windmills.

Greg has me pull over just outside the Yosemite gates. He is nauseous from my frantic driving, careening around tortuous mountain roads. Much of the eastern Yosemite area looks scraggly from recent forest fires. The famous Valley is intact but full of late-season tourists, many European.

The four of us just after dark pull into our weekend home at Housekeeping Camp. I booked four rustic cabins. Each cabin has three concrete walls, a vinyl fourth curtain, a canvas roof, covered sitting area, two bright lights, one electrical outlet, and a fire pit. We designate Mike and Rob’s space as the meeting area.

Before it closes, we rush to Curry Village to split a large pizza with beer on their porch. John and Tom arrive soon after we finish dinner. The misty weather blows colder than expected. Greg and I huddle for warmth. The last four of our group arrive long after we go to bed.

In the morning, John orchestrates a fierce breakfast of pancakes, bacon, hash browns, and pineapple cake while Spinach and Giorgio pack us sandwiches for lunch. We discuss day hikes and pick the 3,500-foot ascent to Glacier Point along the Four Mile Trail.

Seven of us set out along the valley floor to the trailhead while John, Mike, and Rob plan to meet us later up top with two cars. Rain threatens. We stare up the cliff face with bewilderment, incredulous that our trail might wend its way so high. We plod ever onward and upward. The sun shines.

We break halfway up for sandwiches. Our legs tire from all the granite steps. Tom leans on a mop handle. We shed layers from heat.

At four o’clock, we “summit” Glacier Point where we meet the two cars. Although the final view is grand, I prefer the climb itself. We drink tea at the overlook and poke around the geology exhibit about the Valley’s formation. On the way down in the cars, the heavens finally open with rain, sleet, and snow. The shower tapers through the evening, not dampening much our campfire dinner.

Rob and Mike prepare their famous taco meal. I grill carne asada and tortillas. Greg puts together a jicama salad while Spinach opens several bottles of champagne. We eat until stuffed. I make a birthday speech after which we split fat cake. Spinach and Giorgio kindly give me a light-up umbrella.

Light rain continues through the night, banging on our cabin’s canvas roof. Greg and I huddle again for warmth.

We wake early to rush to 9am brunch reservation at the Ahwahnee hotel. Despite camping, we still sit for a San Francisco-style brunch. Under the Ahwahnee’s massive redwood beams, granite walls, and towering windows, we scarf down endless cheese blintzes, oysters, smoked trout, and eggs benedict.

At the close of the meal, it was time to go. Rob and Mike drive on to Sacramento. Tom and John depart for San Francisco. Greg and I hike to the bases of Lower Yosemite and Bridleveil Falls, both just trickles in the current drought. Camping usually means getting away from people, but not at heavily-touristed Yosemite.

Last year, I celebrated my birthday on a San Francisco beach, this year in Yosemite Valley. I wonder where my birthday will take me next year. 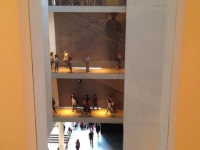