Dear Greg gave me for my birthday the greatest gift ever: a slim book titled, “Build iOS Games with Sprite Kit” by Penn and Smith. Perhaps not your cup of earl grey, this instructional guide may close a loop opened thirty years ago.

My brothers and I (mis)spent our youths obsessed with video games. We began on the Atari and Coleco gaming consoles with game cartridges, then moved heavily into the Apple IIe platform with large floppy discs. We bought some of the games. For the rest, one of John’s friends would periodically bestow a bundle of pirated games. Over hours and days, we explored the likes of Bard’s Tale, Ultima, Tapper, and Pinball Wizard.

As much as I liked playing games, I wanted to write games of my own. The BASIC language rendered graphics too slowly for game play, so I dove into the fastest language I could find: Assembly language. When I was 12, I was adding numbers to the stack (LDA), jumping to subroutines (JSR), and drawing graphics with pencils on graph paper that I “digitized” into hexadecimal (6A FF 8E 04).

I wrote a game called “Draw!” for two cowboys that shot at each other over a cactus. In another game, a diver plunged for treasure. Most of my games derivatized existing games with additional quirks. Some games I started writing but got overwhelmed with pages of machine code. Assembly is neither readable nor scalable.

In my mid-teens, my father upgraded the home computer to an Apple Mac. Problem was, there was no way into the early Mac to program games as Apple did not want users to fiddle with the components. I scoured programming hobby magazines for solutions then gave up programming games.

Until now. Greg’s birthday book leads me through writing two simple games, one involving a space ship, the other pinball. I find iOS X-Code impenetrable, but not so much that I cannot follow the exercises. The C-like commands are more readable than my former Assembly Language.

I already have a game idea for a prudent penguin who herds wandering light-up dinosaurs into homes before owls carry them away. Greg and I have such a rich relationship meta-language that I can port some of our tropes into a video game. Many may find the game odd, but the game may features us, or at least our cartoon selves. Thanks so much, Greg! 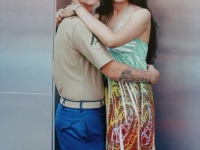