Let’s get this out of the way. In the course of my long life, I have taken LSD. Several times. Tens of times. As advertised, LSD does have strong hallucinatory effects but after a couple days these effects dissipate completely and are not permanent. If my resting brain works differently now because of LSD, it is from an ebullient lightness of remembered joy.

A friend named Hoffman, whose name has been changed to protect his upstanding career, contacted me months ago with a desire to try LSD for the first time. We would consume the hallucinogen, perhaps at his apartment, and we would sit with it to discover. Trouble is, the duration is long (6-12 hours), the intensity is not triffling, and I have neither the time nor energy.

Then I left my job, gained time, and searched for adventure. A hallucinogen evangelist, I can chaperone Hoffman. He planned to celebrate a recent birthday on an otherwise quiet Tuesday with an LSD trip.

We meet for lunch at his favorite local café for vegetarian sandwiches followed by dessert at a nearby Pete’s Coffee. I was nervous, aware of the upcoming uncertainty, length, and complexity.

A friend procured for me four nondescript Altoids, each pregnant with a drop of dissolved LSD. I am not normally a mint eater, so I bought a subterfuge Altoids tin to exchange the pile of white placebo mints for the four special mints. With little fanfare by the window of Pete’s around 1:30pm on a sunny Tuesday afternoon, we drop acid. Hoffman worries that his arms will turn into serpents that will beat him about the head.

He suggests a trip to the beach. Before we turn too incompetent, we board the N-Ocean MUNI tram to its last stop at the furthest western part of San Francisco. Usually socked in by fog, the wide beach is gloriously sunny.

We walk along the shoreline and debate how sand is formed. I take off my shoes. I feel something psychological but not much. This microgram of psychedelia may not work. I poke at crab shells and dead jellyfish.

We get close to the water. A rogue wave washes over us up to our waists. We retreat higher on the beach to dry. We might spend the whole day wet. We each take the second and final Altoid to enhance the otherwise mild experience.

Wandering in the WPA-muraled restroom at the Beach Chalet, I feel something, perhaps a lot of something. I am more scattered, less oriented, a bit frantic, and surprisingly giggly. No, my face never dissolves, nor do I run naked down the street, nor attack Hoffman, nor wallow in a pile of my own self-generated filth. My usually narrow perception widens to notice the intricacy of trees, the wonder of relationships, the drama of birds, and a thoughtful evaluation of my place in the world.

We loll east in Golden Gate Park through many milieus: odd red and orange flowerbeds surround the windmill of the Wilhemina tulip garden; five lucky buffalo laze like five furry brown mountains; on little Spreckles lake, an energetic older man hauls his toy yacht; from a secluded grassy knoll, we spy from above on two holes of a wooded Frisbee golf course; we dance on stepping stones below a waterfall; and the sky darkens the colorful tethered paddleboats on Stowe Lake. Manic runners huff past us in a rush somewhere else.

We delve into the drama of wildlife: resting buffalo, brilliant fucking pigeons, a stately lone white egret sailing over a sea of ducks, impossibly-large seagulls (they make them bigger these days), a blue Stellar’s jay that reminds me of blue-haired Greg, and thousands of ducks madly pecking at seed under a park bench.

The sun sets. Hoffman wishes we had started earlier, just after breakfast, to have more daylight to inspect the wild, otherworldly, tropical plants of Golden Gate Park. The orange, rectilinear building of the de Young Museum fractures through the trees. Perhaps we are tired, but the block exiting the park stretches impossibly long. Police circles around a food van that hit a public bus. I know better than to ask the police in my state for what happened.

We exit Golden Gate Park for chai tea lattes at a Starbucks near the 9th and Irving MUNI stop. All day we skirted people to avoid their realities. At this Starbucks, we are surrounded by people, sober people. Hoffman and I discuss all aspects of life. I drink hot tea while looking at the bookshelves full of commercial goods.

On city sidewalks, we shamble east in the new dark through the Inner Sunset district of San Francisco past convivial restaurants. We board the MUNI tram back to my neighborhood and to my apartment. We are competent enough to navigate public transit.

Before we set out, I had cooked dinner for Hoffman. This is not my first rodeo, so I know what aids recovery from a long trip. Although we are not hungry, as LSD suppresses appetite (not a weight-loss pill!), we eat dinner ravenously. I bake a chocolate birthday cake and light four candles. I thought earlier of how I would like to celebrate my birthday.

We rest on my living room couches to discuss more about relationships, our parents, sexuality, travel, and life. I am quite happy to spend a day so connected to one person, unlike many people’s first LSD experiences hallucinating in a dark club or in a large chaotic group.

Hoffman plans to work tomorrow and I grow weary from the intense interactivity. We stroll up the residential hills above Hoffman’s apartment. From the top of Dolores Park, we gaze on the majestic lights of San Francisco. We huff and puff up Liberty Hill then down past Zuck’s new mansion. We climb the stairs to Hoffman’s apartment.

Twelve hours after we met for lunch, I leave Hoffman to walk back to my apartment. My head is still spinning, but I know exactly where I am. I desire quiet and rest and a restorative shot of whiskey.

It is two days later and my memory already fades of that dense twelve hours. I remember the locations and actors, but I struggle to hold on to the moods, messages, and meanings. We talked a lot. We laughed a lot. It was a day of hooky, of light joy, and of a deed well done. In two weeks, I will check in with Hoffman to see how the experience has sat with him. His tentacles did not beat him about the head. We are both sad that the magical day feels so distant. 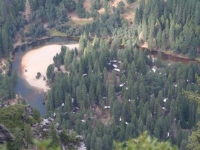