Life sometimes gives me what I want, just not exactly the way I envisioned. I wanted to make furniture with my Dad. We did not build a bookcase, but we did cut and sand PVC to put together an icosahedron.

Currently bored with chemistry, I want to try software engineering, but I have neither the credentials nor the work experience. Computer bootcamps train students for several months to code software and then position graduates at jobs. Not only do bootcamps cost about ten thousand dollars, but also they overstate their placement rates. Nonetheless, a software bootcamp might fasttrack me into software engineering.

I sat last night for the first of many programming classes. Ten of us students got a crash course in HTML. Our computer class meets not only Tuesdays and Thursday nights 6-9pm, but also on Saturday afternoons from 12-4pm. Ten hours of instruction each week is more class hours than any course I took in college.

Gray Area Foundation is a cutting-edge arts and technology collective located in San Francisco. They feature artists who work in computational mediums like video projection, sound manipulation, or LEDs. In their education department, Gray Area offers an intensive ten-week course in Creative Coding. About a month ago, I noticed the curriculum, but could not afford the $3000 enrollment.

At the end of summer, Greg and I attended a concert at Gray Area for sonic/ambient musician Tim Hekker. Grey Area recently moved shop into the giant old Grand movie theater on historic Mission Street. The movie theater is still disheveled and barely functions like a high school gym. The curators are working hard to turn the movie theater into a concert space.

Gray Area will host a New Year’s Eve party with Honey Soundsystem and Sunset Productions. They desperately need art to enliven the party. I know someone who knows someone at Gray Area. Based on my previous art installations, Grey Area offered a scholarship. If I bust my ass to build them an art piece for their New Year’s Eve party, they would sponsor the class.

Over the weekend, I wrote an artist’s biography. On Tuesday, I biked to Gray Area with the turtle shell and starfish as ambassadors of my work. Tuesday night, I sat in class next to another scholarship student. I have a lot to learn.

I thought this year off would be a vacation. I will be busier than ever for the rest of 2014. I’ll sit through ten hours of coding instruction each week while putting together a giant art piece for New Year’s Eve. Meanwhile, I will learn to swim, plan for Morocco, run, and write. 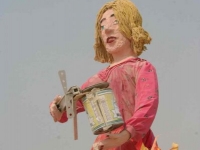