About a year ago, I brought an art piece called The Turtle Shell to Honey Soundsystem’s closing Sunday party. Organizer Jacob liked the Turtle Shell so much that he asked whether we could build for him something similar but much bigger for a New Year’s Eve party.

But the Hexes are so late 2013. Was construction only a year ago? Like spring rains and autumn leaves, New Year’s Eve approaches again whether we want it or not. Jacob asks about a possible New Year’s Eve installation, this time for an old movie theater recently occupied by the Gray Area Foundation.

Jacob pulled strings to enroll me in Gray Area’s intensive programming course. The class curriculum requires a final project to be shown at Gray Area in early January. Guess what? I’m building an installation for their New Year’s Eve party.

It is mid-October. I am soon away to Morocco for the second half of December. Ack, I do not have a lot of time. Artists build new work upon old ideas. I would like to construct another set of screens, but different from the Hexes.

What about triangles? Part of what made the Hexes looks so fresh was their non-grid patterns. Triangles also avoid rectilinearity, and triangles are easier to construct than hexagons due to a triangular grid’s abundant straight lines.

I have diagramed a construction scheme, but I worry that I’m forcing the Triangles on to the Hex crew. Let’s see what they think. It shall be a busy end of the year. 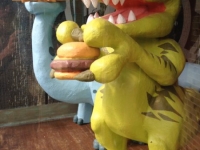