Fall weather quickly turns cold in the high Californian Sierras. Some campsites close for the winter in mid-October, just before the onslaught of snow. Sensing our last opportunity this year to camp in the mountains, Greg, Tom, Jason and myself drove up to Lassen Volcanic National Park for a weekend of camping. Of the four, I was the only one who had visited Lassen before.

A long weekend trip like this one would not be possible if I had a regular job. I would covet too much my few remaining vacation days. Now away from work, I no longer count days off (expect that this one is #194).

The four of us met in Oakland at noon for a spontaneous Korean lunch, after which we drove up highway 5 towards Sacramento and on to Red Bluff for grocery shopping.

Coming off of Burning Man and a large Yosemite camping trip, we tend to overplan. This Lassen weekend was refreshingly improvised. We wrote up a grocery list in the car and bought on the way what we thought looked good. Although we assumed too much food, the ensuing cold weather meant we ate almost everything we brought to stay warm.

We tent for three nights in the walk-in campsite at the south entrance of lonely Lassen. A few other couples also camp, but otherwise the park is mostly deserted. Camping at 6,500 feet means cold nights in the mid-thirties and days that do not reach higher than sixty degrees. I am unused to shivering. Snow lurks in the shadows of the 8,500-foot pass. Winter is coming.

On Saturday, park rangers close the one park road to vehicular traffic to allow bicyclists and hikers uncluttered use of the road. We break camp around noon for a short hike to Cold Boiling Lake. We ascend a steep slope to a waterfall, past several meadows and small lakes to our lunch spot by Cold Boiling Lake. We push on to the inferno of Bumpass Hell and further to the road.

By now, the sun has set and the sky rapidly darkens. We follow the park road back towards our lonely campsite. At switchback loops, we bushwhack shortcuts through woods and swamps. We walk six miles along the road to make for a long sixteen-mile day of hiking. Greg’s feet give out and Tom’s hips hurt. None of us are in good spirits in the cold dark. Finally back at camp, we dive into a large dinner of bison burgers and minestrone soup.

Sunday, I suggest driving (no hiking!) to the north-central park entrance at Butte Lake. En route, we tour the Devastation Area, a section of the park flattened by a lava flow in a 1915 eruption. Lassen has some of the country’s most descriptive features: Dwarf Forest, Chaos Crags, Fantastic Lava Beds, and Reflection Lake. The lone general store by Butte Lake is short on provisions late in the season. They offer bread and beer but no restorative whiskey. 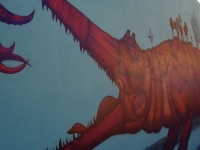