After the sun sets below Lassen peak, the national park cools to frigid. We tromp back to our campsite over snow lurking in shadow spots. The sky darkens to full black. I put on another layer of shirts and jackets. I dig in my bag for a hat and gloves. A long, cold night lies ahead in the tent. Temperatures drop to the mid-thirties. The owls lurk above. Winter is coming.

Cold, dark, snow. I don’t like it. No, not at all. It is death realized to me, both frightening and antithetical. Bring me instead bright and light and happy.

I ascribe my fear of darkness to long New England winters. Leaves head south in October, not to return until May. For six months each year, the Massachusetts terrain looks grim and dead. From December through February, the sun sets at four o’clock.

Through New England winters, I delivered newspapers at 6am. Although in rain or if the temperature dropped below ten degrees, Mom would drive her boys in the car to deliver papers, there were many dark twenty-degree mornings on the bicycle. The advent of spring was a revelation of morning light and hopeful warmth.

My winter fear inspires me to make LED art to banish darkness and bring warmth into the cold. I gather at red and yellow hearths. If I worked more in the fire arts, I would build structures of gentle candles.

I’m attracted to youth and bright blondes. If I could, I would fly seasonally with the birds every fall south of the equator for continual spring and summer.

The other half of summer is winter, the other half of life is death. Blackness makes the light worth noticing. Death impels us to live. I’m not ready to confront my parents’ mortality, or my own. I live as if I were still in college.

This coming weekend kicks off the Halloween season, the dark time for ghouls, skeletons, and ghosts. Perhaps I’ll delve into the macabre, but I will still shine my forty points of light. 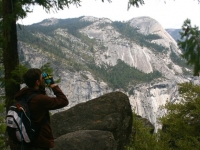