San Francisco rents are astronomical. My monthly rent of two-thousand dollars is actually good value. I don’t want to give up this apartment. To save some of this rent while I am away for three months, I’m subletting to Greg’s haircutter named Chris. She seems quite responsible, nice, and probably not a sociopath, although it is San Francisco.

Chris moves in on Tuesday. She’s playing to stay half the time in my apartment while she ferries between San Francisco and her new house in Austin, Texas. She’s paying half the rent.

To get ready, I spend the weekend staring at every object in my apartment. I put everything I own into three piles: take in car, put in storage, leave for Chris. Greg counsels that the sublet should come with use of all the hats. “Hats?” I ask, and then notice that the living room harbors ten hats on shelves and walls.

I plan to be away from San Francisco for three months, returning mid-July, just as searing heat scorches the country. There’s a reason why I was so eager to quit my job in April. I did not want to drive through either winter’s darkness or autumn’s decay.

People ask where I might go. Greg and I drive first to Seattle. After he flies back, I drive east through Montana, North Dakota, and Minnesota. Solo traveling can be lonely, exhausting, and monotonous. After two or three weeks on the road, I want to land fall in Yellow Springs, Ohio, at the apartment of my brother. I can unpack my car into his doorstep and resume domestic rhythms. My brother and I can throw a huge party or make an extravagant dinner. We can make smaller trips through the Midwest or check out his favorite bars.

After Ohio, I camp for a week in Tennessee, then drive north to New York City and eventually home–home home–to Boston and my parents. I’ll spend mid-May through June catching up my parents and older brother. Weekdays, we can take walks and work on projects. Weekends, I can bus over to New York City.

Just after July 4, I turn the car around to head back west. I have not yet decided which route to take back to San Francisco, except that I would like to return mid to late July. 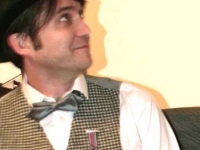