I mark a US map with my summer driving route. Except for spurs into Tennessee and Montreal, the route follows one northern squiggle heading east and one central squiggle heading back west. I put blue boxes over cities where I spent the night.

The mapped route does not look like much. Is that all? Next time, I would like to traverse the South. I have already seen much of the Southwest through Arizona and New Mexico. Years ago, it was within the desolation of New Mexico’s White Sands National Monument that I found the will to return to society and work.

I have one more cross-country drive in me, just not now. I dream the drive from Seattle, Washington to Key West, Florida. On that trip, I can pick up five of my remaining six states: Oklahoma, Arkansas, Mississippi, Georgia, and South Carolina. Or I start my drive in my last, sixth state: Alaska. 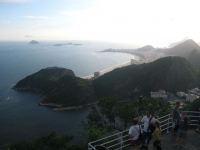