In class yesterday, we turned off the lights to turn on six projectors. Pointing the projectors into dark parts of the classroom, we threw on the walls a chaos of pictures, movies, and animate gif’s. Phillip and I placed a dancing Janet Reno down a ceiling chute and lined a buttress with wiggling trees.

In this last instructional week of class, we learn projection mapping or how to throw light on irregular surfaces. For years, I’ve seen mapped projections in galleries, at parties, and on buildings. I’m amazed at and flustered by the technique’s complexity.

Last night, we learned the ease at mapping quadrangle video, not as complicated as anticipated. On Thursday and Saturday, we move on to three-dimensional surfaces and non-quadrilateral screens.

I want to project images on the Triangles I’m building. Furthermore, spherical projections look fantastic with the projector either shinning within the sphere or on to it. I need to buy a cheap projector and dive into various software packages, like Processing and Sketch-Up.

Trouble is, I already make LED art. External projection may fight the internal glow of LEDs, especially because projections are much simpler. Can I be both an LED and projection artist? Projection displays aren’t moveable unlike LED wearables, but they certainly look cool. 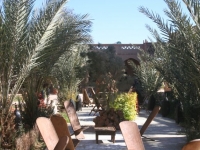