The Triangles are done – well, at least the hardware. Yesterday, I screwed together the remaining 3 white wooden frames in John + Tom’s garage, after which Greg and I plugged in the six triangles. Five of six triangles did light up, enough of a success.

I returned after dinner to diagnose the wiring problem for the dead triangle: two wires were switched. Some soldering later, all six triangles came to life. I’m happy.

Yet the Triangles lack software. I’ll throw a “Hail Mary” pass this week to code them. This has been a lonely project. 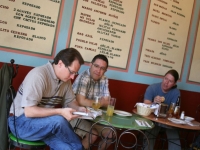