I sit in a garage while mechanics change my car’s oil, check the brakes, and put air in the tires. I’m trying to avoid disaster on the road.

I bought this 1998 Toyota Corolla almost 7 years ago. I had quit my job in Boston and was about to drive across the country from New England to Arcata, California. Trouble was, I did not own a car. Furthermore, my future co-pilot was flying out one-way to meet me in New York City in one week. It was a race game: buy a car, get it licensed, insured, and inspected in less than a week. Then drive 20,000 miles. Go!

I bought a blue Corolla off a student who was leaving for school in Chicago.  She arrived at my parents’ house with her Mom in a second car. Our mothers approved of this dowry. I paid $3,300 for the vehicle that had 100,000 miles on it. I’ve almost doubled that number in seven years and hope to add 10,000 more miles this year.

The car spits engine oil out the exhaust. Hauling all my worldly goods in 2007 ruined the rear struts. I bought new tires and changed out the brakes.

When I’m not working, I do eccentric projects to prove I’m not working. It’s Tuesday; time to paint the car. I was then living/squatting in an Austin, Texas living room. I bought yellow auto paint and sand paper. One afternoon, I sanded down two car panels and painted them yellow. I planned to turn the car into a fierce tiger, but did not get further than those two panels. Now the yellow hood and trunk make it seem like I survived a bad wreck. Nonetheless, people recognize my vehicle wherever I leave it. Those scrapes on the bumpers? No longer care. If you ever need help sanding down your vehicle, just give me a call.

Today I opened all four doors and the trunk to gauge the carrying space. I feel like a snail packing up three months of belongings in the Toyota carapace.

What to bring? I’m driving the northern route in early April. I still need a winter coat, tire chains, and an ice scraper. I’m attending the summer festivals of Beltane in Tennessee, Firefly in Vermont, and Mutek in Montreal. I condensed my Burning Man gear and shoved that too into boxes. I guess if I ever get too lonely and cold, I can put on a stegosaurus outfit and roar at the moon. 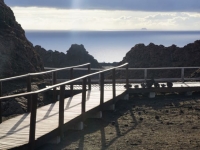