It is Groundhog Day, an auspicious and troubling day for me. Traditionally, the groundhog on this day emerges from his or her burrow to look at sun. Shadow, or lack thereof, dictates the commencement of flourishing spring or six more weeks of the same cold winter.

Like a groundhog, I peer out of my burrow for either bright change or six more weeks of the dreary same. Instead of shadow stalking, my weather prognostication depends on my mood (sadness or hope?), neurochemical signaling, and attitude.

I feel stuck with the same script, like Bill Murray in the film Groundhog Day: three break-ups, three reunions. Am I the same actor, or can I pick a new role? Does the story have to end the same? Perhaps I need better dialogue.

It is auspicious day 300 of this adventure. I plan to resume work on Day 365. The dwindling sixty-odd days left scare me. Not finding work and running out of money also scare me. I sent off a resume on Saturday to hear that it was favorably received. 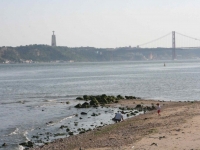