A long time ago – let’s see if I can remember when – early 2008, after New Year’s but before Valentine’s Day, I drive south from Mike’s apartment in Denver, Colorado through New Mexico. I park the same ol’ Toyota at White Sands National Monument for a quick five-mile hike. On foot, I leave the parking lot behind and soon leave behind all people too to enter a world of only white sand, lacking landmarks, even signs.

I am alone and potentially lost. Out there in nothing, I finally have the urge to return, not just back to my car, but also to finish my year of travel, to get back to work, to resume a career, and to plant roots. Less than a month after that hike into the white sands, while drinking a Mexican martini on the back of Trudy’s restaurant porch in Austin, Texas, I get the word of a job back in Menlo Park, California for which I need to report in less than two weeks.

Today, I find myself alone again, but at a different end of the world, this time at the edge of a volcanic crater in gale-force winds that pelt grit on the left side of my face. With my skinny black jeans, black hoodie pulled over my head, and black sunglasses, I look less like a hiker and more like a punk rockstar on a mission to Burma, or just heading nowhere particular. To my left falls a deep crater worthy of casting in the one true ring. To my right loom craggy, denuded mountains. Across the crater, I can spot my little lone car with the yellow hood.

I sit against the wind to write a list of ten things I’d like to accomplish in my forties. At the end of the world, I plan for what happens when I return back into the world. I’m ready. I’m ready for work, for new challenges, for sitting at one desk in one place for a long time. I’m ready for money, for amassing useful things and for squandering a pile on gold for larks with friends.

At Scotty’s Castle – a folly of a mansion within Death Valley National Park – a costumed park guide leads our group through ornate living rooms. At the end of the tour, the guide turns on a spectacular pipe organ that can play automatically hundreds of songs from the roll. I’m entranced. Someday I want to be a park ranger, perhaps when sixty after I have shed material cares and careers to embrace instead the simpler turn of the seasons and the parade of wide-eyed tourists like younger self.

Who visits Death Valley in March? The average age is 70 and predominately white. Pick-up trucks extend side mirrors like jug ears. Bellies protrude and belts sag. Accents announce the Midwest and Utah. I want to ask everyone their age, not to judge, but to relish how many more decades ahead I have to travel. Oh to be seventy and still on the road.

Adversities so far have been small and unexpected. When I returned yesterday afternoon to my campsite, I found my tent turned over in the wind and my cooking possessions scattered. I did anchor my tent with two water jugs, but I thought the sandy ground, looking like concrete, was too hard for stakes. I flip my tent over, dust the mattress pad, and locate my cookware. Crisis solved!

Death Valley is about connection and the lack of it. Travelling on my own into the desert, I thought prudent to update periodically my San Francisco base camp with my progress and survival. Trouble is, Death Valley has no cell-phone reception. My phone blankly states, “No Service.” On the one hand, I worry about emergencies and my inability to call for help. On the other hand, I am free from the usually pervasive grid. No text messages, no e-mail, no Facebook. How will anyone know what I am seeing and that I have stood here in the deathest of valleys? I put away the phone and take out a book, a sketchpad, and my ten-year old camera.

I have disconnected fully from friends, job, home, even identity. My car wears California plates, but otherwise nobody knows or cares who I am and where I’m from. I could reinvent myself, or put aside the habits and marks for which I’m known. Shed it all.

I do seek connection in Death Valley, but with something bigger than people. I burrow within the desert, like a gold miner expecting to find something precious here. Death Valley historically never yielded valuable minerals except for heavy hauls of borax.

Just after sunset, I drive the two miles from camp to the Mesquite Sand Dunes. I park the car, grab a water bottle, and head into the dunes. I shall sit in the sands until either dark or vision.

While I head into the dunes, most trudge the other way back to their cars. I have already missed optimal light to photograph the bisected piles of sand so this will not be a photography expedition. I climb dunes and descend valleys in the direction of the tallest dune that I reach and ascend. I’m at the top of a sand pile in quickly fading light. Now what?

I wait for meaning. Tell me what it is all about. The National Park literature warns of sidewinder rattlesnakes, especially at night on the dunes. I watch clouds go red then black. I try lying down but get a faceful of sand. Evening thermal wings obliterate my footsteps and the record that I was here. We all die alone.

Alas, a vision does not arise. I can create conditions for meaning, such as leaving my house, yet I can’t force enlightenment. So I knead the sand much like at a beach. I count three stars in the sky, enough for some to declare nighttime. Worried about fading light, rattlesnakes, and the ubiquitous owls, I trudge back in the direction of my car. I can no longer see the parking lot in the darkness, but I site a star and follow that beacon towards the mountains. It is the North Star, the Polestar. 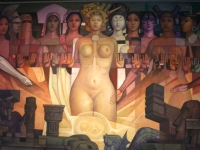