Because Vietnamese renters – or is it owners? – pay taxes based on the width of their property, skinny and tall buildings sprout all over Ho Chi Minh City up like palm trees. Greg and I sleep on floor 9 of 11 at the An An Hotel, so skinny that the hotel holds only two rooms per floor. From our sole window (another luxury in Vietnam) overlooking the backpacker district of Pham Ngo Lam, we watch traffic whizz by at all hours of the day.

Out on the street, I hold tighter to the moped’s two rear handles as the scotter squeezes into traffic and pushes through the crowded intersection. Do I press my knees around my stewardess driver whose name I cannot pronounce? Like in a video game, Greg bounces in front of me on an identical white bike, driven by a similar white-and-blue clad hostess.

Over four evening hours, I dodged scooters and lorries, but could not avoid food delectable but scary. At an outdoor barbecue restaurant, I bravely ate shrimp heads and goat breasts. Later at an outdoor seafood emporium, I hesitantly scarfed down crab claws, spicy clams, and scallops. Such bravery from an inveterate non-invertebrate eater! With enough garlic and chili, I can overcome most creepy-crawlies, but I demurred at the fertilized duck egg, supposedly crunchy. Greg and I slept at 10pm that first evening happily stuffed but bewildered at the crazy that is Vietnam. 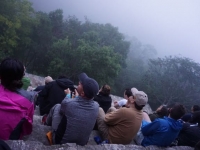