We fall asleep before 11pm and wake before dawn at 7am. Last night we stumbled back to the hotel past crowded bars full of ex-pats drinking around plastic beer tanks. Although I avoid the lager louts after a day of site-seeing, I lament no longer wanting to push into the party. Am I finally old? Later in the trip, we can drink cocktails with umbrellas on the beach of Hoi An. Still, the roving bicycle salesman sells an interesting tableau of dried squid.

Ho Chi Minh City is short on sites, just a few buildings and monuments to photograph. Residents identify with a petite belfry attached to the main market, but the clock tower looks rather squat, yellow, and non-descript. Instead, we take pictures of traffic, food, and flowers. We conduct our own walking tour past historic hotels, like the Majestic and Caravelle, but think little of their colonial presence. The Reunification Palace (formerly South Vietnam’s Presidential Palace) features a party floor with a mah jong set, 60s shag, and three severed elephant’s feet. Greg meticulously photographs the ancient radio equipment in the basement’s bunker. While visiting dignitaries snorted lines off banana leaves upstairs, harried generals plotted defensive troop maneuvers downstairs.

What Ho Chi Minh City has is life. This is modern Vietnam in which most people live, motor, and eat – not just for the tourists. On our wanders, we spot boy scouts, a graduation ceremony, and kids having weekend fun. 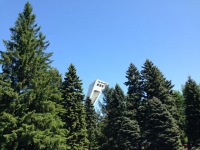