We’re in the air over coffee plantations hurtling towards coastal Da Nang for three nights in the royal city of Hue. No way! Yes, Hue.

Yesterday, Greg and I ate and stumbled through much of Dalat along the city’s “romantic” lake. Outvoting the romance, my digestive system still has not stabilized to a schedule, preferring instead to hold everything in uncomfortably. Even copious coffee does not help. With this obsession over shitting – or the lack thereof – I have officially become an old man.

We slept last night under a mosquito net. I feared waking up confused, trapped by a spider. We never did figure out how to program their shower that advertised music with multiple massage jets.

Over our two-night stay, we deduced that the helpful crazy German woman at the hotel was indeed Axel’s sister. If I marry a Burmese woman, will I invite my brothers west to help run our Pangon guesthouse? Greg and I woke this morning at 6am to check out by 6:45am to make an early-morning flight. I commune more with morning sparrows than evening owls.

We spent the afternoon idly waiting, a pastime inevitable on any junket. We boarded a 10am tourist train from Dalat station that rumbles twenty minutes to a highland farm village. The train waits forty minutes for tourists to investigate the nearby temple and then returns to the big city. We took a German lodger’s advice and skipped the return train to spend more time in the farm village.

Skipping the train, we climbed up to the Crazy Temple – this region excels in crazy. We donned shoe covers to ascend the temple’s pagoda. I rang a bronze bell with a swinging timber to make a wish for job prosperity. Down below, an extensive haunted house enumerated in Vietnamese the horrors of bad Buddhists.

After the Crazy Temple, we marched along to the Cao Dai temple, home to one of the world’s newest faiths that amalgamates Buddha, Confucius, Jesus, Shakespeare and other luminaries. Rows of white columns floated on a sea of polished marble surmounted by a starred sky-blue ceiling, psychedelic in a way more stark than at the Crazy Temple.

Back at the train station, we found no tourist train to take us to Dalat. So we sat for coffee, and sat, and sat some more for two hours. We read “books,” actually our electronic Kindles – the same book called “All the Light We Cannot See.” Nothing for us to do except watch life go by in this little farm town. The lone train station attendant rose from his nap to drink tea, change into his formal uniform, and grab the official yellow flag. 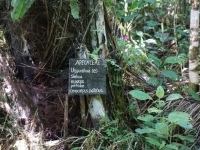