Our day in Hue begins at dawn with patriotic music blasting from the stadium across the street from our hotel. From our top-floor window, we spy costumed dancing, martial exercises, and lots of flags in the rain. The breakfast staff downstairs tells us that today is Hue’s city Independence Day. “Independence from whom?” we wonder until we see banners that read: 3/26/75 – 3/26/15. Independence from the Americans. We are the bad guys. The independence situation is more nuanced as American troops pulled out of Vietnam in 1972 leaving the beleaguered South Vietnamese to limp on for another three years.

After breakfast, we march around the Citadel of Imperial Hue. The Nyugen dynasty unified north, central, and southern Vietnam in the 19th century. The 13 Nyugen emperors ruled Vietnam from 1808 until abdication in 1945 not to French colonists who weakened the country, but to Ho Chi Minh. As American forces heavily bombed the citadel, few original buildings remain, so sprout up contemporary reproductions. Excellent signage explains court life headed by a taciturn Emperor (as few official gestures as possible), run by the Emperor’s mother, and executed by a cadre of ranked Mandarin officials.

After our tour of the Citadel, we return to the business of our trip: food. We fast realize we do not have enough time to eat everything. Nonetheless we plan. Hungry and disoriented, we sit on red plastic chairs at an outdoor restaurant overlooking the murky river and the Citadel. Our host chef speaks no English and serves us her only two menu items, but her bun ga (noodles with herbs and grilled chicken in a peanut sauce) and fresh spring rolls are excellent, even revelatory. No more should we dally in restaurants that feature the fanciness of menus and roofs.

I do insist we return after lunch to the Boulangerie so I can revisit my morning joy with une pain au chocolate. This café trains disadvantaged youths in pastry making, then places them in fancy hotels around Vietnam. Their brioche au chocolate – so fluffy, decadent, and warm.

On our walk back to the hotel, we discover a lane near our hotel full of imploring street-food vendors. Although we just had lunch and dessert, we resolve to return for yellow noodles, com hen (rice with clams), and many more. When we return after sunset, most vendors had gone home, disappeared into the fog.

In the evening, we tour the backpacker bars, avoiding the popular DMZ and Backpacker Hostel to sit down at our favorite The Little Owl. Over a couple of games of Carcassonne on Greg’s tablet, we drink four total draft Huda beers. The bill? A ludicrous 32,000 Vietnamese Dong or one dollar and fifty cents. $1.50! For four beers! For six quarters, two mates can have a night out. I should move to Hue to write the great American novel. 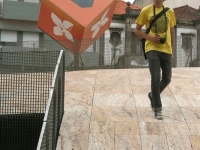