The narrative of Joseph Conrad’s Heart of Darkness progresses from the big city up river into increasingly smaller towns and villages to find eventually the animal within. Greg and I fly from the big city Ho Chi Minh, to the small city Dalat, on to the town of Hue, reaching eventually the village of Hoi Ann. However, we progress into increasingly touristic and affluent communities to find the shopper within.

In Hoi Ann, shops sell custom suits, shoes, leather bags, silks, and paintings. The common Vietnamese greeting implores, “Buy Something!” a command, not a question. I convince shopping-adverse Greg that we should spring for cut-paper postcards, coffee beans, and two coins embossed with our Chinese birth year animals of rat (me) and tiger (Greg).

I lament that most shops sell the same goods that repeat every block or two. A quest for the unique turns disappointing with the realization of mass production. Likewise with the food in Hoi Ann, many restaurants serve the same local dishes of cao lau (beef over thick noodles), white rose dumplings, and wontons. At least our previous city of Hue specialized. Yet the two of us are hardly unique tourists, two among the throng that descend daily on Hoi Ann.

The first impression is not all gloom as Hoi Ann shines as the most picturesque town so far in Vietnam. Photo opportunities abound in every yellow street hung with red lanterns, riverfronts floating with old junks, and through doorways glimpsing two-hundred year old dark-wooden houses. 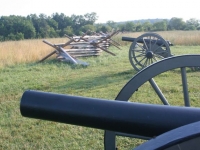