Angkor Wat is hot, hot, hot. Twenty years ago, I followed ancient Khmer temples east through Thailand quite close to the Cambodian border, but never to the holiest of holies, the great Angkor Wat. On this trip to Vietnam with another brush of the Cambodian border, I did not want to forgo a visit to the world’s largest religious building. Greg and I end our south-east Asia stay with three nights in Siem Reap, Cambodia. We fly today one-way from Da Nang to Siem Reap. Four days later, we fly back to Ho Chi Minh City.

We are greeted at the Siem Reap airport by 35C late-afternoon heat. The flat tropical plains burst with palm trees and seep with moisture. We buy Cambodian visas at the airport in exchange for $30, three sets of forms, a passport photograph, and queuing in front of uniformed bureaucrats. My passport fills with another colorful full-page visa, useful later only as an expensive souvenir. In much of Cambodia, the preferred currency is the US dollar.

We are staying at the Memoire d’Angkor, the most luxurious hotel of this trip. I drink free mini-bar Angkor beer and peel prickly red rambutans while lying in the clawfoot bathtub. Lobby servants arrange tuk tuks, recommend restaurants, and offer complimentary green drinks.

We eat dinner with the rest of the ex-patriot crowd, i.e. white people, at a classy Cambodian restaurant called Chanrey Tree. Cambodian food features fish and curries, but lacks the heat of Thai cuisine and the prevalent fresh street stalls of Vietnam. We splurge on wine and sticky rice dessert. The $50 dinner bill doubles the price of any of our trip’s previous dinners.

In the morning, we rent two mountain bicycles for the day. Heat already beats down in the 90’s. We pedal foolishly away from the hotel, turn left, and bike into the Cambodian countryside towards the ruins of Angkor. We plan this morning to tour Angkor Thom, the largest Angkor temple.

Thom teams with tourists, many acting poorly by clogging staircases and lingering too long for photographs. I run from one shaded spot to the next, as if in a rainstorm. We drink many half-liter bottles of water. I worry Greg will wear out, grow angry, or die of heatstroke. Isn’t 95F bicycling through the jungle romantic?

Moats surround many temples. We climb crumbling piles and note the faded Buddha heads, nagas, and lions. Friezes depict elephant parades. We mount steep flights of wooden stairs for views of the valley. Finally beaten by the noonday sun, we hop back on our bicycles and retreat to our glorious hotel. I fill the bath, raid the minibar, and look for more rambutan. 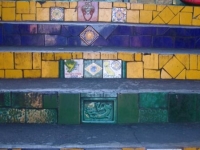