Eying me suspiciously, Canadian border patrol asked about my carful of stuff. The officer shut the glass window for private consultation. My passport stamps to Istanbul and Brazil may not have helped my great northern cause. After rattling me, the officer let me drive on from the border at Winsor into Canada.

I wanted to drive through Canada to witness the majesty of America’s hat. Majesty be dammed, there is little on the two hundred miles from Winsor east to Toronto: green plains, red farmhouses, occasional truck stops with fast food and gas, probably expensive but too hard to calculate.

I have arrived at the People’s Republic of Tim Horton’s. His shop name is so prevalent that Tim ought to be on Canadian monetary notes. Tim Horton’s does sell coffee, but I have yet to figure out what else.

Friends remind me that international phone charges can be exorbitant and that Canadia is indeed international. I turn my phone off on the international bridge. Bereft of internet maps, I return to nostalgic navigation. Before I left Ann Arbor, I scribbled by hand (yes!) hasty directions to my downtown Toronto hotel. With some cursing and 1.5 more quarts of oil, I abandon the car in a hospital municipal parking garage.

I’m staying three nights and two days alone in Toronto. I have heard so much about Canada’s largest city (is that by population or area or average weight?) that I thought best to lay over in Toronto on an arc from one brother in Ohio to my parents in Boston.

I find myself Wednesday night on the seventeenth floor of skinny Bond Place Hotel overlooking the miniature Times Square-lite lights of Dundas Square. Chain stores of H+M and Roots surround the square. I ate dinner in the underground food court of the giant Eaton Center mall. Am I slipping? At least I choose chili chicken over udon. 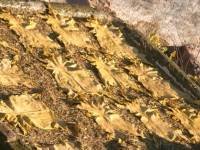