Montreal blooms in late spring with festivals such as jazz, blues, film and comedy. Like the swallows of Capistrano, I fly back almost annually to Montreal for Mutek, a small festival for electronic music. This year, I drove.

Memorial Day morning, I pick up a fellow-festivaler in Somerville. Eve and I tootle north through rainy New England traffic and memories. We pass highway exits for my deceased grandparents farm in Henniker, New Hampshire, as well as another former family farm in Barre, Vermont.

At about five o’clock, we cross the quiet Canadian border with our allotted one bottle of whiskey. Vermont’s green mountains change into Quebec’s flat fields and one-street villages.

I turn my phone off to avoid international data charges. We follow hand-written directions across a bridge into downtown Montreal. We park the Toyota in an alley and unloaded into our AirBnB apartment for the week.

The stricken faces of our compatriots in the living room signal disaster. The apartment bodes much worse than advertised. Small dorm rooms with bunk beds and odd en suite showers connote international sex-trafficking flophouse, not family vacation. The kitchen is a hot plate on a shelf.

We cancel the apartment reservation, panic, and call Montreal real estate brokers. Fortunately, John Major has rented vacation apartments for a decade from the same genial but crazy woman. John rings her up and is scolded for not contacting her earlier. She directs us to a door down the street with key code. This new apartment looks great. I fetch the car, drive it to the old apartment, and pick up all our luggage. In less than two hours, we have moved. Crisis averted. 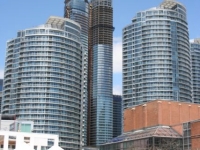