The Montreal apartment has faster internet than at my parents’ house. I order parts for the icosahedron and check my stocks.

I try to knock off one cultural attraction each day in Montreal to counterbalance the evening drinking and dancing. On a bright Friday afternoon, David and I take the Metro to Mont Royale station and climb up the mountain park for which the city is named. We first fuel with Lebanese coffee and baklava in a twee neighborhood of artisanal T-shirt, bicycle, and sushi shops.

The forested park feels more cloistered than yesterday’s wander through the open Botanical Gardens. Runners and bicyclists pass us on our laborious ascent up a dirt road, then metal steps for a city view by Le Chalet. David buys ice cream. Rain threatens.

We descend the mountain and ride the subway back. Our apartment stocks a fondue pot with forks. Tom melts half a kilo of emmenthal cheese while I cut up bread and apples. David cooks a block of merguez sausages. Fortified by lashings of red wine, the five of us poke comestibles into a cheese pot.

Before sunset, we bixi downtown. While David, Eve, and Tom sit for the early A/Visions show. John and I shuffle/dance at a free outdoor concert by the museum of contemporary art. The eight o’clock dj chain smokes and builds well her rolling set. The crowd is fiercely fashionable. I want to run shyly home, burn all my clothing, and start anew.

John and I take a break from dancing to toy with outdoor art. A conveyor belt of colored wooden blocks triggers a light show projected on an adjacent concrete building. A fountain dances red and white lights around three black baleen speakers. Children and adults play on giant LED-lit swings. We guess that the biennial art exhibition is in town as Montreal’s spring exuberance shames US stodginess.

I duck into the Imperial concert hall for an hour show by Robert Henke. He zaps a reflective screen with bright-bright white lasers, perfectly synced to bleeps, bloops, and scratches. The colors are so bright and the motions so fast that I need rest my tired eyes.

My night sags under its accreted weight. I limp through the shows at Metropolis. Matthew Dear, under the stage name of Audium, gyrates in a dodecahedron dj dome. Upstairs, two women play extraterrestrial melodies accompanied by images of the moon. At two am, I slog down the pink-canopied St. Catherine Ave. Tom and Eve study recipes for cannabis butter. 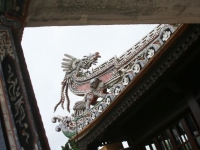