We spend Saturday in bed. We may be tired of touring. Three of us restock the house’s larder at the IGA supermarket. We fill three carts with bread, cheese, yoghurt, and lots of wine.

I have eaten so much music this week. Two afternoons in a row, John and I shuffle and sway at the free outdoor concert above the contemporary art museum. The pleasant cocktail music bounces better than some of the darker and thumpier late-night show.

From seven-thirty pm to ten, we sit in red-velvet opera chairs to listen to the three acts of the evening A/Visions series. The opener Paul Prudence swirls black and white discs accompanied by tonally-similar music, if you can imagine what swirling black and white discs sound like. Afterwards, an energetic (possibly) German tweaks a frantic piece called Seismik. I happily sleep through much of the grinds and bloops. A/Visions finishes with a Japanese duo that projects colorful vignettes over playful beats.

The week wears out our fivesome. Tom and John bixi home to retreat from music. Eve fights off itchiness and tiredness. David and I walk over to the main concert hall called Metropolis. We ascend to the cavernous seated balcony for a couple of calm hours drinking beer and listening to a succession of Dutch and German groups. Two giant projectors shoot intricate patterns on nested hexagonal screens.

The bored crowd blends black-clad, indie-music savants with young Montreal kids. I am accustomed to San Francisco’s extroverted glitter, so I find rather boring the Canadian crowd. This Saturday show is billed to last until six am – well past sunrise and past what I can stand. David peels off from the concert hall to hear a smaller show somewhere else. I jump on a 1:30 Bixi bicycle to ride home.

I wake early to brew coffee, cook two trays of bacon in the oven, and toast a sesame bagel to serve with smoked salmon. The other four residents sleep after eleven through the adjacent church’s Sunday bells. 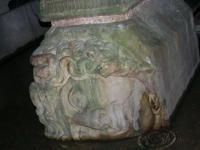