Today’s solstice kicks off summer. I have been on the road for almost all of spring. I’ll be home before the earth bakes too hot.

This longest day warms me in Brooklyn. I have stayed in New York City for the last three weekends. I crave the compressed, crazed, and creative–New York satisfies until it stuffs. Fortunately, I have an antidote to the urban madness: my parents’ quiet home. Unlike residents of the Big Apple, I get to turn the party off.

I’m saddened by this last time in New York City. Although I have friends here, this is not my home.

Friday afternoon, I disembark from the bus in Chelsea (New Yorkers are obsessed by location) and scurry by Penn Station. I pick up a toasted poppy-seed bagel and ride the subway to Park Slope. Amanda dresses for a film opening in Harlem. Patrick and I go for beer and brats in the backyards of two neighborhood bars. We discuss television, ancient Greece, dating, fatherhood, and the battle between nature and culture.

Patrick and I return to an empty apartment to watch a German film called The Lives of Others. I prefer to catch up with an old friend than sit through a Broadway musical or Yankees ballgame. I’m learning. As I stay longer in Gotham, this gigantic city shrinks down to the neighborhoods of the few friends I know and the spots they frequent. 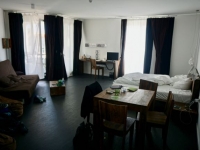