I returned from the woods. I’m back from a week camping in Vermont, a bit discombobulated but glad to have attended the annual Firefly Festival, a Burning Man regional event for the New England community held over the Fourth of July week.

Heading to the event, I drove four hours on Monday through New Hampshire and into forested Vermont. I spent Tuesday hauling the goods from my car through the woods to two campsites. Tuesday afternoon, I put together the Platonic Solids while curmudgeon Doug Ruuska playfully mocked me from his perch on a camp chair. Doug deserves a rest, shackled to his own upcoming giant Burning Man project.

I pitched a tent among the twenty others of Camp Cabana Hammock. We strung hammocks between trees and served afternoon cocktails over bass beats. Leslie and Joed kindly organized our massive infrastructure. Jeff Mission set up his sound equipment and expertly wrangled slates of afternoon DJ’s.

I say “we,” but I’m quite ashamed that I did little to help Cabana Hammock. I did set up tarps with Jeff and served cocktails with Leslie. I learned that I am a terrible joiner. I prefer to labor quietly on my own projects. I cooked meals on my little camp stove and put up the Platonic Solids.

It rained–hard, but fortunately not long. As the clouds massed late afternoon Wednesday, I pushed my belongings under the overhanging tent tarp, then fled out of the forest to the porta-potties by the parking lot. It is important to take a dump before a rainstorm or else face an awkward choice later between “fullness” and wetness. Lightning lit my way to the parking lot while thunder beat its drum. The heavens opened soon after I performed my duty. I hid in my car from the fat drops battering its roof.

Unfortunately, I had left my tent partially open. I dashed out of the car. I jumped trail puddles past brown horses, through the fields, back into the woods, up the hill by Bring-A-Cup camp, and into my home at Cabana Hammock. I flung myself into my tent and zipped up the tent fly.

My poor Platonic Solids suffered rain! Their guardians at Meat Camp unhooked the power during the Wednesday rainstorm. When I replugged the Platonic Solids after the rainstorm on Wednesday night, only the cube and octahedron re-lit. The other three solids were potentially short-circuited. On Thursday, sun dried out the Firefly land. All five solids glowed again on Thursday night, merrily chatting to each other. A savvy engineer counseled me not to fear water in low-voltage applications like LEDs.

I moved away from Boston seven years ago. Many I knew then have also moved on to San Francisco or had children. Adults in my circle pick either the path of parenting or California.

Coming back to the Firefly Festival after a six-year hiatus, I did encounter a dozen friendly faces from a past life. Some faces like Corey’s, I did not initially recognize. People still remember me. There was even an unknown cadre that had heard about me. Although some call me a celebrity, I think of myself as more notorious. I try to stoke the fires of legend.

People don’t change much. After seven years, although we generally look seven years older, we maintain a core personality and drives. Many of my friends are becoming more their own cartoon characters. Or, that character has always been present and they are now shedding their commodified shells. I cherish them for their strange selves.

As much as I embrace the community of Boston, midway through my stay at Firefly, I grew quite lonely. I don’t live in Boston anymore. I felt like a wandering dabbler who leaves no trace in the woods. I rather put down roots. 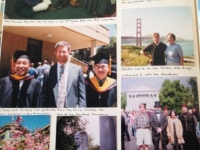