I wake without a clock in the woods. I pack up the tent and cook a camp breakfast of cold cereal and espresso. Driving away from the park, I check the phone: 7am!

The Gettysburg battlefields are deserted at sunrise. I drive the twenty-mile loop over the Union and Rebel ridges, by the horrific wheatfield, and through the peach orchard. On Little Round Top, I see where the Union general spotted the massing Confederate troops and sent quickly for reinforcements for the Union’s slim left flank. This general likely saved the war for the Union.

I drive by tourists clustered at the Gettysburg museum and decide not to stop. I walk among silent ranks of cannon and crossed wooden fences. I climb to the National Soldiers Cemetery where Abraham Lincoln gave the Gettysburg Address. A plaque engraves his epic text. Such a sad place!

I drive west into the Pennsylvanian mountains and take a detour. I wish to visit all 50 states before I turn 50. As I lack West Virginia, I make amends. I cut south into Maryland and then west in uncharted territory on scenic highway 86 over the Appalachian Mountains.

The poor Toyota struggles ascending the rolling hills. At the hilltop rest stop welcoming West Virginia, I add a quart of oil to the hot engine. I pass Cumberland town hidden in the hills. Closed West Virginia fascinates me.

In Morgantown, WV, my car companion turns 200,000. I have shared one hundred thousand miles with the trusty Toyota. We have traveled 7,500 miles together on this trip out east. I just ask that she brings me back to San Francisco, after which I can put her out to pasture. 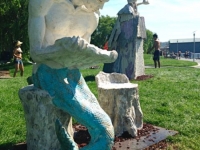